As a depositor, that is. The $7.1 billion asset 5-Star Nationwide Bank, Columbus, OH is exiting the retail banking business in favor of more lucrative insurance and retirement operations.

Nationwide Bank was chartered in 1998 and added to our rate pages ten years ago (JRN 25:28). Over the years it has frequently been listed on our Top Rates chart. But no more. We have dropped Nationwide Bank  from our rate pages while it searches for suitable institution/s to transfer its retail deposits and consumer loan portfolio. It breaks down like this: 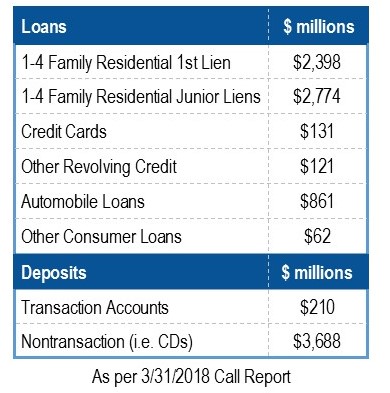 Its rates are no longer competitive (0.20% for 1 year) anyway. Now, you may be asking yourself, “What’s the big deal?” After all, the banking industry in the U.S. has been consolidating and shrinking for years, decades even. What’s so different about this one?

The answer can be found in the bank’s own statement, which was first reported in The Columbus Dispatch on May 7th:

“After careful review, we’ve determined that a significant additional investment would be required to gain relevance and be competitive in retail banking.”

That concerns us. A $7 billion asset bank deems itself to be not relevant and at a competitive disadvantage. What message does that send to the  97% of U.S. banks that are smaller than $7 billion (in assets)? Then we looked at the BIG picture.

Nationwide Banks’ Top-Tier holding company, Nationwide Mutual Insurance Company, is a $35 billion company with over 300 unique entities under its umbrella. Only one, Nationwide Bank, is subject to greater scrutiny and reporting requirements that go along with carrying FDIC insurance. While Nationwide Bank has been and remains profitable, it is probably safe to assume the company makes more profit in its other ventures. And, in spite of the regulatory relief bill signed into law on May 24th, that isn’t likely to change.

Nationwide Bank was (and still is) a prominent community bank. Although it only has two branches (both in Ohio), it ranks #24 in total deposits at community banks; #18 in total assets; and #21 in total loans. What’s more, 86.27% of its loans are geared toward consumers (either in the form of 1-4 family residential mortgages or consumer loans). Only 65 U.S. community banks have a higher percent. The top 50 are listed on page 7.

The majority of these banks will benefit from the new law, as will consumers, veterans, seniors, students, homeowners and credit unions. By creating tiered regulatory relief for community banks and credit unions, it allows community institutions to better serve their local customers, whether on the farm or on Main Street.

The new law is also intended to stall, or at least slow, industry consolidation. It may be too little and too late for Nationwide Bank, but a healthy local market, starting with healthy local banks, should benefit consumers and small business across the country.

As for Nationwide Bank, it says it could take months to determine what exactly will be happening with its deposits and loans. If you do business with them, they will be in touch with updates. Don’t be surprised to see other large banks, those that are still considered significantly important (SIFI) to pull out of retail banking as well… at least in less profitable areas. That would be a welcome change for our country’s community banks, which have been struggling to maintain their market shares. The number of community banks dropped 4.3% from first quarter 2017 to first quarter 2018. Noncummunity banks lost 3.7%. Not a huge difference, but look at the percent change in these other areas:

Loans to consumers were led by credit cards which were up 8.5% at community banks and down 8.8% at all U.S. banks.