Mutual conversions were once a way to make an easy buck.  In the ’80s and ’90s it was common for depositors to open accounts at any mutual that would allow them. Then they’d sit back and hope the mutual would decide it was time to convert.

Depositors on record would get first crack at any stock offering and there was good money to be made. And it was easy money. But those conversions fizzled out after the turn of the century. Last year we reported that they were beginning to heat up again (JRN 34:12 & 32). But they’re different now.

We see the pace quickening as seven banks converted in the first half of 2018, and several more are in the pipeline. But what exactly is a mutual? What differentiates it from any other bank?

Mutuals are owned by the depositors rather than stockholders. As such, they have more freedom to decide what to do with their profits. Since most mutuals are small, many feel pressure to grow in order to remain viable. Aside from organic growth, which can be very slow, a mutual can elect to merge or convert.

If it elects to convert, it may issue stock; it doesn’t have to. A stock institution is owned by shareholders, who typically want dividends. So, while a stock conversion can fund the desired growth, it comes at a steep price. Selling stock ownership can lead to loss of control, as it often did in previous conversions.

The end of last century could have also been the end of the mutual charter. But mutuals date back to the 1800s in some cases and those who believe in them have a deeply embedded philosophy. A full stock conversion would be unfathomable.

The solution: create a two-tiered holding company structure. A conversion is completed whereby  the former members of the mutual  bank become members of the mutual holding company (MHC). This structure is gaining in popularity. In fact, according to the FDIC, six mutuals that completed conversions in the first half of this year used this two-tier approach. (The only one that didn’t was Huntingdon Valley Bank in PA.) All seven conversions that occurred in the first half of 2018 are listed on the chart below. 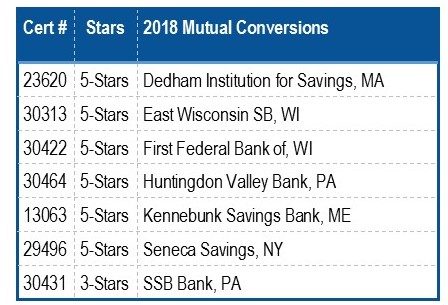 In addition to being able to fund growth, a two-tier MHC structure allows the MHC to acquire other mutuals. In this way they can pool assets as well as costs. In fact, in the latest American Bankers Association’s semi-annual Mutual Survey released in April, 34% said they considered merging with another mutual during the past year. That may seem high, but it’s actually down from 44% in 2016. The reasons given were split 50/50 between a) preserving their culture and values and b)  economic and/or regulatory pressures.

Another interesting tidbit from this survey was that while 32% of respondents said they were organized as MHCs, only 5% said they issue stock. What do the rest do? They create programs or charities to give back to their communities. An example of that mutual spirit can be found in the April 1st acquisition of 2-Star Colonial Co-Operative Bank, Gardner, MA by 5-Star Fidelity Co-op Bank, Fitchburg, MA. Fidelity converted to a two-tier holding company structure in 2006. In 2013, it developed a community dividend program that provides financial support to local organizations and causes. In 2017 alone, it donated more than $350,000 to over 200 causes. Colonial Co-op is now a part of this bigger, stronger organization.

The list on page 7 and continued on this week’s insert contains all mutual banks based on FDIC data as of March 31, 2018. Those that converted or merged during the second quarter are highlighted in yellow as  are any that no longer exist.

While it may seem that the number of mutual banks is dwindling, and it is, it is doing so at a slower rate than the banking industry as a whole. Mutuals currently represent 8.7% of all FDIC-Insured banks. That’s up from 8.2% ten years earlier. The reason is twofold:

1) Mutual banks are more conservative and hold more capital. They are therefore less likely to fail than their counterparts.

2) The desire to preserve the mutual charter and remaining mutual banks runs deep.

So, while it is still possible to make money in a mutual conversion, the industry has done a pretty good job keeping profits local. After all, that is the point of a mutual charter.