The U.S. Department of Agriculture recently forecast that 2018 net farm income would decrease 6.7% or $4.3 billion in 2018—to its lowest (nominal) level since 2006. One segment expected to buck that trend and actually grow, was soybean receipts (forecast to rise $1.7 billion). However, not only do soybeans represent roughly 60% of U.S. agricultural exports to China, they also top China’s list of tariffs levied on U.S. products.

As you know, President Trump has  levied tariffs on a number of products from China and has said the list will continue to grow. China has responded in kind.  So, where does that leave soybeans and the farmers that grow them?

The White House acknowledged that farmers would be “taking one for ‘Team America’” and on Tuesday (7/24), announced a $12 billion temporary aid program specifically for farmers hurting from these trade disputes. The White House seems to believe this trade war will be short-lived. Maybe it will, maybe it won’t. Either way, the source of the aid is finite ($30 billion max to be exact). If that’s not enough to get them through, they will have to seek other, less finite, avenues of help.

Community banks come to mind. According to the FDIC Quarterly Banking Profile for March 31, 2018 data, there are 1,390 insured institutions classified as “Agricultural Banks”. These are banks where agricultural production loans plus real estate loans secured by farmland total more than 25% of total loans and leases.

Looking at these banks, we can tell you that most are well-rated with over 90% earning recommended (5-Star or 4-Star) ratings from Bauer. They also tend to be well-capitalized with 97% reporting a leverage capital ratio greater than 8%; 68% over 10%. That’s good; it indicates they have a cushion in the event that agricultural loans begin to go south.

Not that we expect that to happen, but we always have to be prepared. The majority of these AG banks have exhibited judicious underwriting as evidenced by the fact that 79% boast a Bauer’s adjusted capital ratio greater than 90% of their respective leverage capital ratios. (Remember, Bauer’s adjusted CR factors in delinquencies.) Another way to look at loan quality is this: 54% have a delinquency to asset ratio of less than half of one percent.

We wanted this issue to focus on banks that focus on farmers. For the list on page 7  of this week’s issue of Jumbo Rate News, we  took banks that have at least half of their lending devoted to agriculture—either secured by farmland or loaned to finance agricultural production. The 50 banks listed also had the most growth in farm lending over the 12 month period ending March 31, 2018. They are all small community banks, mostly in America’s Heartland.

To be sure, neither the bankers nor the farmers asked for this trade war, but sometimes things happen that are out of our control. We won’t comment one way or another on whether we believe these trade wars are good for the country or not. Our concern is what happens to the banks—the unintended consequences. What matters to Bauer is that our community banks can continue to supply credit where it’s needed and that the credit extended continues to be done so prudently.

At this point, we have no idea how long the trade war will go on. Until then, eat soybeans! 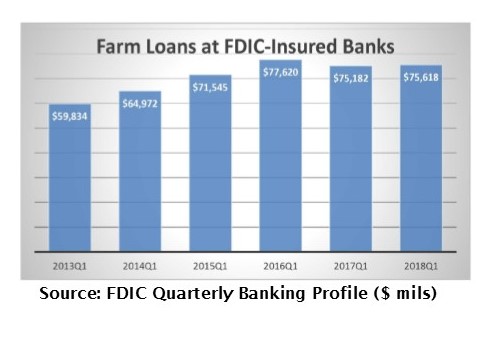