Wish we’d thought of that. But alas, the credit for that slogan goes to JRN listee 5-Star BMO Harris Bank, Chicago, IL. We have reported several times on the excessive fees charged by some banks (JRN 33:08), especially those that cater to our military and their families (a la 5-Star FSNB (formerly Fort Sill National Bank, Lawton, OK, which has a service fee to transaction deposit ratio of nearly 22%, one of the highest of any bank in the nation).

This week, however, we would like to laud community banks that have low service fee charges when compared to transaction deposit dollars. Why only transaction deposit dollars? Simply because that’s where most service fees are levied. These service charges include: ATM fees; maintenance fees; failure to maintain required minimum balance; non-sufficient funds; stop payments; wire transfer fees; annual fees; inactivity fees; and even check and deposit slip fees.

The list goes on, but one item specifically excluded is early withdrawal penalties on CDs that exceed interest earned. This amount, along with service fees are both part of the larger noninterest income as are trading revenue and gains on asset sales. Noninterest income, in turn, is an important part of the Efficiency Ratio that we discussed a couple of weeks ago (JRN 35:30).

The next logical question would be, why just community banks? We wanted to narrow our focus to banks where basic banking (checking,  savings and lending) is still their top priority. Out of more than 400 Non-Community banks, only 24 report that 50% of total deposits is in transaction accounts. As a matter of fact, BMO Harris Bank is not one of them. It specializes in commercial lending, which it funds largely with your certificates of deposit.

Before we continue, let’s be clear: service fees are a necessary and important means for banks to make money. That doesn’t mean we should be the one paying those fees. Regulations and legislation enacted since the financial crisis combined with increased fraud have made checking accounts more and  more costly to the institution and some of that cost has to be passed on. But there is a difference between covering expenses and taking advantage of customers.

The community banks listed on page 7 and the accompanying supplement to this issue  have no problem covering expenses without astronomical fees. They each have both:

There are currently 140 and the majority are strong, well-rated community banks. They are doing just fine without charging  exorbitant fees. (In fact, several were also listed in that JRN 35:30 issue as having among the best efficiency ratios in the nation as well.) And two of the banks listed this week have fees so negligible that they round down to 0.00%. They are: 5-Star First Century, NA, Gainesville, GA and 4-Star Nexbank SSB, Dallas, TX.

The FDIC Quarterly Banking Profile doesn’t break down service fees on deposit accounts; it just provides the much larger, noninterest income total. So we took that one line item from the quarterly call reports (see chart below). Based on first quarter 2018 data, this year looks poised to closely mimic 2016, but don’t be fooled. These things have a habit of changing. A preliminary peak into second quarter call reports indicates that, when all is said and done, 2018 could end up dwarfing 2017 and leaving it in the dust. We’ll have to let you know as the year progresses. 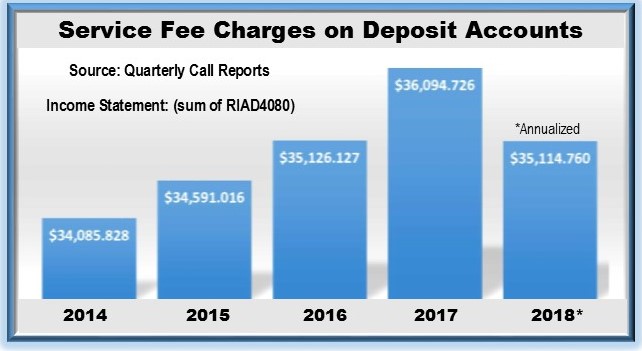