Last week we reported that the percent of recommended credit unions (i.e. rated 5-Stars or 4-Stars) now exceeds 81% of the total. Of those, 111 that were 4-Star rated last quarter have now earned Bauer’s highest, 5-Star rating. They  can be found on page 7 and on the supplement to this week’s issue.

This is one of at least nine such transactions that have taken place since 2016, but it wasn’t always this easy. Bids from credit unions were not solicited for banks until recently. So when Second Federal S&LA of Chicago, IL failed in 2012, the FDIC accepted the best bid it received. That was from Hinsdale B&TC, IL. Hinsdale paid $100,000 for the bank’s deposits and certain assets. It  quickly turned around and sold its three new branches to Self-Help Credit Union, Durham, NC which had wanted to expand into Illinois.

Five years later, Self-Help C.U. cut a similar deal with State Bank of Texas Dallas for nine of the ten branches it had acquired from Seaway Bank & Trust, Chicago, IL, which failed on January 27, 2017. 4-Star Self-Help C.U. isn’t just looking for bank branches, in its 35-year existence, it has acquired 13 credit unions as well.

Another acquisitive credit union, 4-Star Marine Credit Union, La Crosse, WI, has successfully acquired 14 credit unions since 1984—including one this year—but it also gained an appetite for bank branches. When 4-Star Associated Bank, Green Bay, WI acquired Bank Mutual, in Milwaukee this June, Marine C.U. was able to obtain five of the branches. Since then, it has  entered two separate agreements to buy a total of 42 branches from Old National Bank, Evansville, IN.

5-Star Achieva CU, Dunedin, FL claims to have had the first “whole bank”  credit union purchase when it bought Calusa Bank, Punta Gorda, FL in 2015 (although our records show that it was number 2). Either way, it is using the knowledge

gained in the transaction to help like-minded credit unions and banks across the country navigate through the process. Achieva also has another bank acquisition of its own in the works, that of 5-Star Preferred Community Bank, Fort Myers, FL.

As long as the institutions involved perceive they are getting a good deal, we expect we will see this trend continue to pick up speed. So far they seem to. The selling banks are getting more bids, which drives up the sale price. Once sold, the bank customers decide for themselves whether or not they want to become members of the credit union. And the credit union gets its desired expansion.

The average bank purchased has less than $150 million in assets, making them too small for many banks to be interested in. And at least so far, all CU acquirers are rated either 5-Stars or 4-Stars by Bauer. 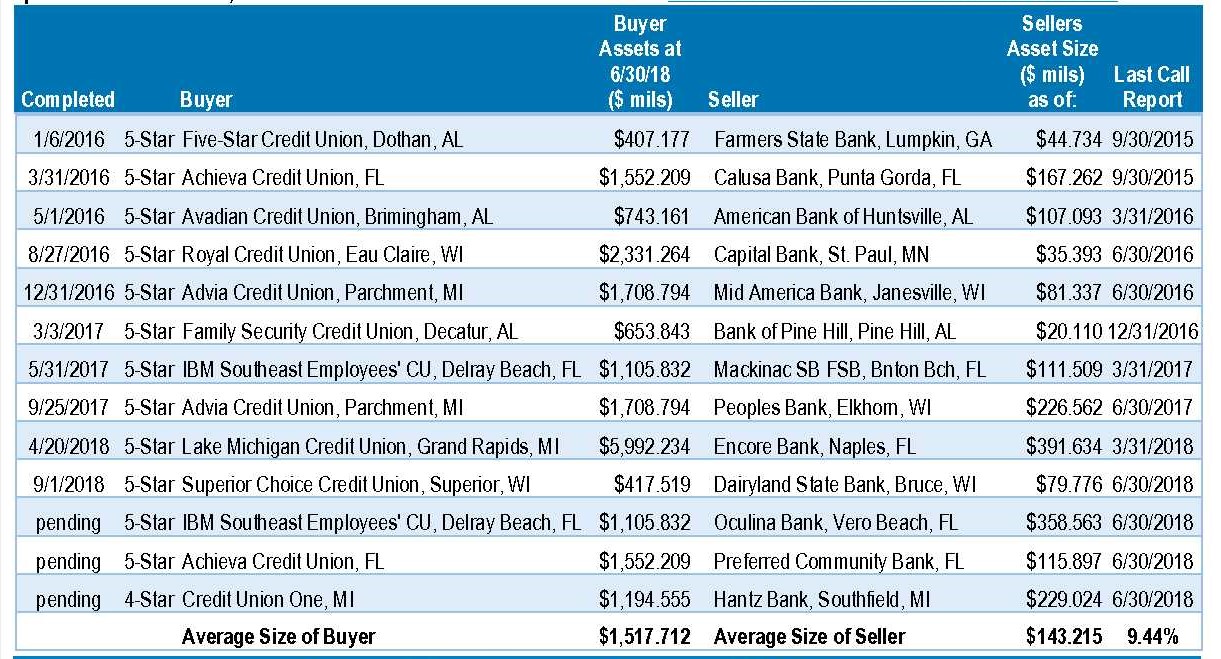