Bank of Internet, USA, CA was established in 2000 as one of the first “internet” banks in the United States—hence the name.  In 2011, it was renamed to BOFI Federal Bank and now again to Axos Bank.

Since its inception, the now 4-Star  rated Axos Bank has grown into a nearly $10 billion asset bank that operates two brick and mortar branches in addition to its online presence. It is also one of the most efficient banks in the nation (see page 7). Axos Bank has an impressive Efficiency Ratio of 33.25%. The Efficiency Ratio is essentially the amount needed to generate a dollar of revenue—so lower is better. The national average for community banks at June 30th was 63.52%. In fact, Axos Bank is in the 98th percentile.

With over $12 million in assets per employee, it ranks in the top 4% (96th percentile) in that category as well. In addition, Axos Bank has among the top net interest margins in the industry. At 4.34%, it is in the top 9% among All U.S. Banks.

Since the majority of its business is conducted online, it isn’t surprising that Axos Bank can do business so efficiently. Let’s go across country to see how they do it on the East Coast.

5-Star rated Hingham Institution for Savings, MA, for example, addressed just how it planned on improving efficiency in its 2017 Annual Report. After making  significant investments in digital banking capabilities in 2017, Hingham Inst. continues developing strong teams for both digital and private banking customers.

Its net interest margin, however, dropped-from 3.05% to 2.90%. The average for community banks in the Northeast (New York Region) is 3.36% (3.66% nationwide) It may be able to bring that back up once it’s able to take full advantage of the new digital account gathering and lending.

We did not include the net interest margin in our criteria for page 7, though. To compile this list, we first narrowed down our base to community banks with an efficiency ratio less than 50%. From there we selected those with the most assets per employee.

According to the second quarter FDIC Quarterly Banking Profile, average assets per employee rose 3.9% at U.S. community banks during the quarter to $5.3 million at June 30, 2018. All of the banks listed on page 7 have well over double that amount.

So, why should you care how efficient a bank is? With these two measures firmly in the upper percentiles (a higher ratio for assets per employee and a lower ratio for efficiency), net interest margins …and ultimately CD and savings rates could go up. In fact, many may look familiar to you already.

Those highlighted in bold and blue are either current or former JRN listees. We look forward to adding more. 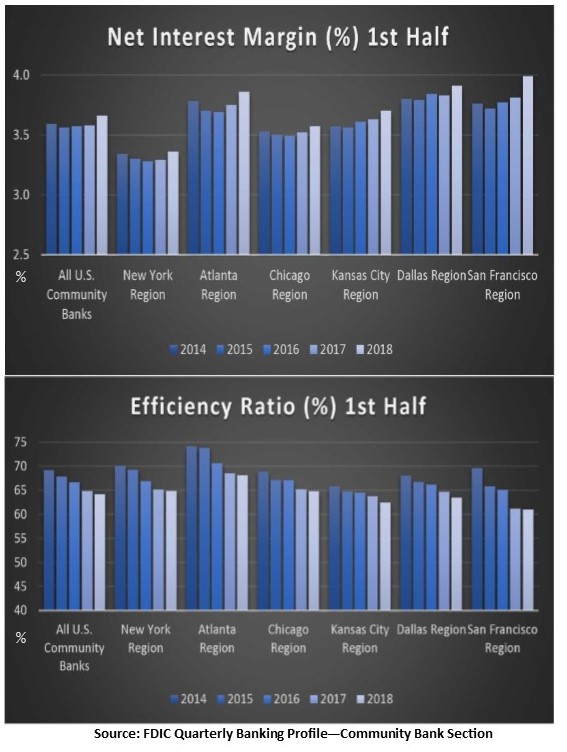