If you’re a bank, that is. There are several ways; the 50 banks listed on page 7 have proven so.

The first bank on the list, 4-Star MapleMark Bank, Dallas, TX managed to increase its net worth by almost 4000% (from less than $2 million to over $80 million), but it’s not your typical story. It’s more of a tale of two brothers.

The brothers, Tony and Eric Davis were CEO and president of F&M Bank & Trust Company, Tulsa, OK until it was acquired by 5-Star Prosperity Bank, El Campo, TX back in 2014 (one of nine banks acquired by Prosperity since 2012). The brothers stayed on at Prosperity and in Tulsa for a time, but eventually left and relocated to Dallas.

Using their connections in both Texas and Oklahoma, the Davis brothers solicited prominent families to form an investor group to create a new bank that would put its primary focus on “higher net worth individuals, family offices and middle-market companies needing private and commercial banking and borrowing needs up to $15 million”.

Instead of starting a de novo bank, however, the investor group chose to invest their $90 million of capital into the purchase and recapitaliza-tion of $22 million asset 5-Star First National Bank of Edgewood, TX. They relocated the main office to Dallas, opened a branch in Tulsa and renamed the bank MapleMark Bank.

Scroll down the list a bit on page 7 until you see Zero-Star Cecil Bank Elkton, MD. Cecil Bank had been operating under a Prompt Corrective Action (PCA) from August 2015 to December 2017. During that time, it filed for Chapter 11 bankruptcy which allowed it to eliminate tens of millions of dollars of debt to both the U.S. Treasury (TARP money) and private investors. It then sold new stock and raised $30.2 million in new equity.

While this new capital has moved it from “Critically-Undercapitalized” to “Well-Capitalized” in regulators eyes, it hasn’t done a thing to improve its star rating. Cecil Bank is still bleeding money and is still bogged down with nonperforming loans. (Its Bauer’s adjusted capital ratio is negative 4.36%!)

The only bank on page 7 that is currently less than “Well-Capitalized” by regulatory standards is Zero-Star Grand Rivers Community Bank, Grand Chain, IL (noted in red). Also please note that those rated 2-Stars or below each had a decrease in assets over the year. (Selling assets is a relatively easy and common way to beef up capital ratios.)

Another thing you’ll see is equity rising because of a merger or acquisition. You can usually tell if this is the case simply by looking at the last column. If assets increased considerably, like 105% at 5-Star Sterling National Bank, Montebello, NY, there’s a good chance it was due to an acquisition. Sterling NB acquired Astoria Bank, Long Island, NY in October of last year and nearly doubled its size in the process.

5-Star Bank of Houston, N.A., TX, was known as Dublin National Bank until it was sold in May to BOH Holdings, Inc. Dublin NB (which will retain that name in the town of Dublin). Prior to the purchase, it has just $30 million  in assets. With the capital injected during the purchase, its leverage capital ratio went from 12.6% at March 31, 2018 to 39.7% at June 30th. The new owner has no intention of making any changes to the community focus of the bank. It looks as though the Chairman of the Board, Jim Mulloy, simply wanted to retire and wouldn’t do so until he found a like minded replacement. 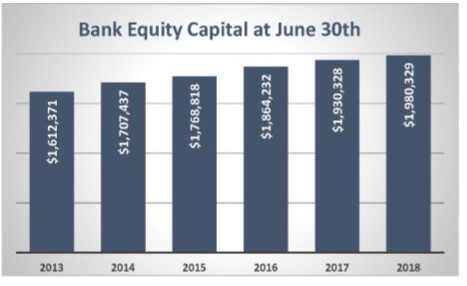