We may have hit a wall in interest rate increases, (at least for the time being) but that hasn’t stopped consumers or businesses from taking advantage of rate hikes we have seen. From December 2016 through December 2018, the Federal Reserve raised the target Fed Funds rate by 2 percentage points.

CD rates have responded in kind. For example, the top 1 year Jumbo CD rate listed in JRN has gone from 1.25% at year-end 2016 to the 2.80% that you see here today. Organic deposit growth is a very welcome by-product, particularly when those deposits can be used to fund loans at even higher interest rates.

Organic deposit growth takes time, though. As you can see from this chart, annual deposit growth at all U.S. banks has been ranging from about 3½% to just under 6% (5.8%) over the past few years. 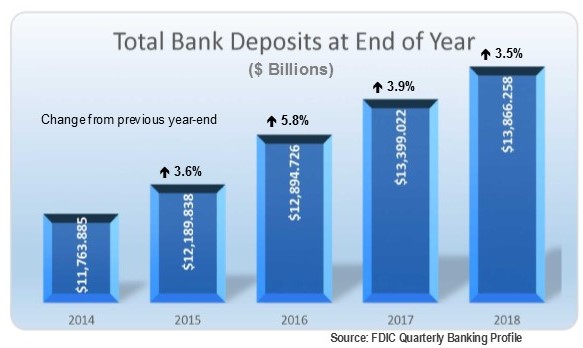 Conversely, the 50 community banks listed on page 7 grew their deposits more than 56% (in some cases much more) during calendar 2018. In most cases, this growth was achieved with an acquisition.

The banks at the top of the list, however, did things a little bit differently. The first two we reported on last year. In an article entitled “How to Double Your Net Worth in 1 Year” (JRN 35:42), we explained how two brothers opted to purchase an existing bank charter rather than apply for a de novo. That was the story of 3½-Star MapleMark Bank, Dallas, TX,

Similarly, 3½-Star Nano Banc, Murrietta, CA purchased Commerce Bank of Temecula Valley and rebranded it. This was included in ”Banks Get Bigger, Stronger…at a Price” (JRN 35:47). Each grew several-fold and each suffered consequences of such rapid growth. (Both ended 2017 as 5-Star institutions.)

Today, let’s focus on 4-Star M1 Bank, Macks Creek, MO. Veteran banker, Ken Poteet, had a vision to create a “mission/purpose-driven” bank. To do so, in July 2017 he created a bank holding company, M1 Bancshares, based out of St. Louis. The second step, in January 2018, was to acquire Bank of Macks Creek, MO, a $30 million community bank that he rebranded and molded into what it is today.

Last November the community joined Poteet in a ribbon cutting ceremony for its second branch in Clayton, MO. While it just has the two branches, M1 considers itself a national brand, and as such, is dedicated to affordable housing and renewable energy on a national scale. Ken Poteet founded Sterling Bank, Poplar Bluff, MO back in 2004. He resigned in 2016 after Sterling had amassed more than $1.2 billion in assets through 11 branches. With more than 30 years of banking experience and contacts, he has reportedly partnered with developers to finance over $3 billion in related projects in 30 states…so far.

Closer to home, in St. Louis County, M1 Bank’s mission includes the reinvestment of 10% of its profits back into the community. Here are just some of the projects M1 bank is involved in:

The list will undoubtedly continue to grow as the community’s needs change and the bank’s reach continues to grow.