Federal Credit Unions are set to gain a new tool in the fight against predatory payroll lenders. The current payday alternative loan (PAL) option has been available to FCUs since 2010, but for the past couple of years, NCUA has been looking at ways to expand/modify the rules. The goal is to attract members to the FCU and away from more expensive alternatives.

The new PAL2 was approved by the NCUA board and will go into affect 60 days after publication in the Federal Register. It won’t be a moment too soon. There is clearly a demand. The first six months of 2019 saw more than a 26% increase in PAL lending over the first half of 2018, and there is no sign of a slow down.

The changes will include:

Members may take out more than one PAL in a six month period as long as the borrower only has one outstanding at a time and doesn’t mix PAL types.

Four hundred and eighty-two federal credit unions issued PALs in the first half of 2019. That’s actually down slightly from 484 during the first half of 2018. But the credit unions that are issuing these loans increased their volume substantially between  June 30, 2018 and June 30, 2019. The volume had been increasing in recent years (see below) but the increase was hovering in the 4-6% range. The first six months of 2019 saw a 19.4% increase over 2018 in quantity and a 26.7% increase in total dollar amount of PALs. 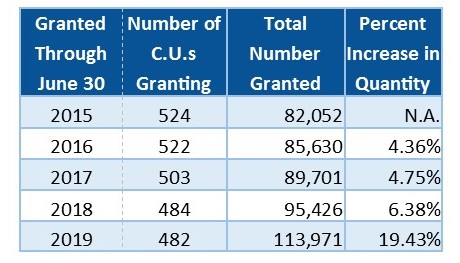 Some opponents believe PALs to be just another predatory lending gimmick. We can understand their concern. The interest rates charged on the PALs  have typically ranged between 4% to 28% Annual Percentage Rate (APR). On the surface 28% looks pretty high, but remember these are short term loans, generally paid back in weeks so the 28% APR can be a bit misleading.

When President Obama took up the issue of predatory lending, some predatory payday lenders were charging 400-450% interest (JRN 34:43). And that’s not all. With interest and fees added on, borrowers would often have to keep rolling over their debt, causing an endless “cycle of debt” they could never hope to repay. So while we are a bit wary of the increased appetite for PALs (as we are about the increase in credit card debt (JRN 36:35)), we prefer consumers have their needs met through reputable institutions as opposed to the alternatives.