Every year we look forward to the American Farm Bureau Federation (AFBF) release telling us how much Thanksgiving Dinner should cost. And every year we go shopping and spend considerably more than their survey suggests we should. That’s why it’s important to understand that the Farm Bureau survey has used the same “Classic Basket” year after year since 1986.

While this may not be the same basket of ingredients that you have on your Thanksgiving Dinner table, it “should be” representative of inflation… which was essentially non-existent this year. The cost of AFBF’s “Classic Thanksgiving Dinner” for ten people increased by one penny this year ($48.90 to $48.91).

Believe it or not, that one penny is actually a pretty big deal. The cost for the three previous years had been on a steady decline. Last year’s survey produced the lowest price for the feast since 2010. This year’s is now the second lowest.

To reflect changes in American customs and eating habits, the AFBF  added a second set of ingredients to its survey last year. This is the first year we have a comparison on the new expanded menu, which was up 60 cents to just over $6 per person.

Now, if your dinner costs more, you’re not alone. Neither of the AFBF menus include beverages, appetizers  or any extras. But, it is heartening to know that a well-rounded turkey dinner is affordable for the majority of Americans.

The AFBF survey is not a scientific study, but an informal survey conducted by volunteers across the country. This year, more than 250 volunteers took their lists to check prices at grocery stores in 38 states. They were instructed to look for the best possible prices without using coupons or other special deals.

Here’s what they found: 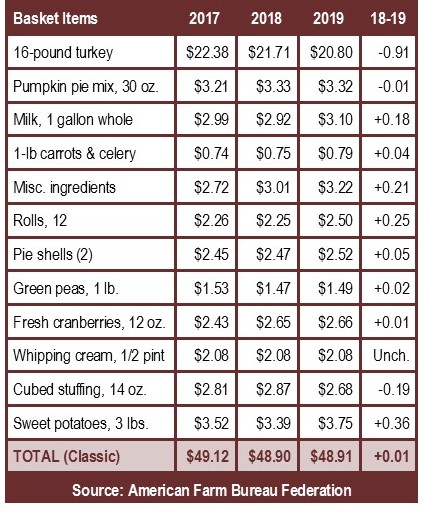 (Note the price of the turkey itself. According to the survey, retail turkey prices are at their lowest since 2010.) The “New 2018” basket items are listed below.

“Americans continue to enjoy the most affordable food supply in the world, but most don’t realize only 8 cents of every dollar consumers spend on food goes to farmers,”  says AFBF Chief Economist, Dr. John Newton. Another AFBF survey revealed that most Americans have no idea what a small sliver of the pie the farmers actually get.

And that brings us to  our list on page 7. The 50 community banks listed have the most money invested in our farmers, either in farmland loans and/or loans to finance agricultural production. While the AFBF says “most Americans have faith in those who grow their food,” these community banks are literally putting their money where our mouths are. Some have more than three-quarters of total loans dedicated to farmers. Now that’s trust.