We ended calendar 2019 on a positive note, with a list of 50 community banks with large volumes of time deposits on their books. It wasn’t just time deposits that were up, though. Total deposits increased over the previous year at nearly 75% of all community banks and actually increased more in noninterest-bearing accounts (6.2%) than in interest-bearing accounts (5.8%). If loan demand remains strong, this deposit growth trend will spillover into the new year.

The only major loan category reporting a decline was Commercial & Industrial, which was down slightly ($0.3 billion or 0.2%). That did not impact the role that loans played in the robust (6.1%) asset growth at the nation’s community banks from the previous third quarter.

Loan growth alone, however, was not what propelled banks onto page 7 this week. The 50 community banks with the most total asset growth from 9/30/2018 to 9/30/2019 are listed there, and while loan growth was certainly a factor in many of them, there are other stories as well.

We reported on the first one, 5-Star One Florida Bank, in October (JRN 36:38). After taking control of a $44 million asset bank, the new owners injected capital (lots of it) and set their sites on the Orlando market. It opened two new branches in 2019 and has two more slated for 2020.

As a rule, growth in a bank is considered both normal and desirable. Accelerated growth, however, can become a problem if capital does not grow in kind. That is NOT a problem for One Florida Bank. While its assets grew $614% over the 12 months ended 9/30/2019, its capital grew by 1654%! As a result, its leverage capital ratio is 35.6%, nearly three times the 11.3% of its peers. Its CET1 and Risk-based capital ratios are over 50%. Again, far exceeding those of its peers.

While One Florida Bank stands firmly in the #1 slot for asset growth, in terms of loan growth, it is at #6. For loan growth, the #1 community bank during the 12 months was 3½-Star Studio Bank, Nashville, TN. Studio Bank is one of about 20 de novo banks chartered since January 1, 2018 (JRN 36:04, 44). It stands in the #10 spot on this week’s list as it continues to grow its assets organically.

5-Star Gateway First Bank, Jenks, OK took yet another path. In May 2019, Gateway First Bank acquired 5-Star Farmers Exchange Bank, Cherokee, OK, its $310 million asset neighbor. Gateway First Bank also reported it was experiencing a string of record breaking loan production months. Its loan production in 2018 was $6.1 billion and set a record for the bank. The 2019 numbers were expected to exceed $7 billion, setting a new record and dwarfing that of 2018. We could continue, but let’s look at how ALL Community Banks fared: 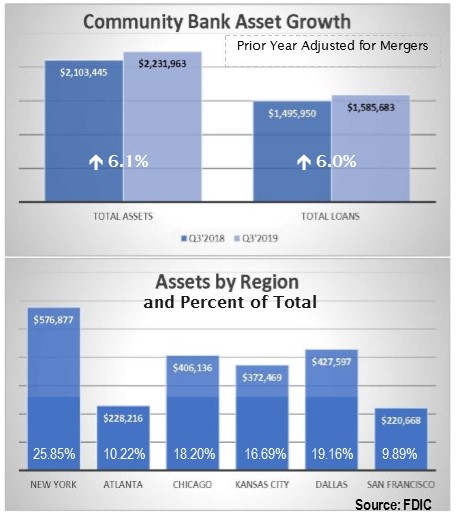