After five straight years of continued growth, U.S. consumer debt passed $14 trillion at the end of 2019, a new record high, according to the Federal Reserve Bank of New York (FRB).

Consumer debt previously peaked in 2008 (Q3) at $12.68 trillion then declined as U.S. consumers worked diligently to lower their debt (particularly credit card debt). Today, not only do U.S. consumers owe $1.5 trillion more than they did at the previous peak, they owe 26.8% more than then they did in 2013 (Q2) after paying off some debt.

The FRB of NY study included all types of household debt (including mortgages) and was based on December 31, 2019 financial data. For our purposes (both last week and this week) we did not want  to include housing debt in our numbers since it does not always act the same as other consumer debt. And, because we do not have access to all of the year-end data yet, our page 7 list uses September 30, 2019 data.

That being said, the FRB report specified "aggregate delinquency rates were mostly unchanged in the fourth quarter of 2019", which we  confirmed on some of the banks we reported on this week.

As a rule, consumer loan quality continues to be strong although we are beginning to see cracks, particularly in the credit card portion. Annual net charge-offs in credit card portfolios increased 6.7% in the 12 months ending September 30, 2019 and noncurrent credit card balances increased 8.1% during the third quarter alone. Loan loss reserves are trending up as well.

When we separate community banks from the rest of the group we see a 16.8% increase in credit card loans during the 12 months ending September 30, 2019 whereas total loans to individuals increased just 4%. Low unemployment may be providing the confidence to pull out the plastic, but credit card loan quality is beginning to falter, particularly at the banks on page 7. 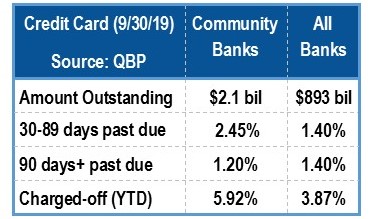 The community banks listed on page 7 all have two things in common:

The first one, 4-Star Farmers State Bank, is a single branch community bank, established in 1912 in Medora, Illinois. Its nonperforming assets are 3.4% of total assets, which is high. But its consumer loans are doing particularly poorly with over 17% at least 90 days past due. Alarming? Perhaps, but Farmers State Bank has two things in its favor:

(The minimums to be considered "Adequately" capitalized are 4% and 8%, respectively.)

The second bank listed, Fortis Private Bank, Denver, is rated 5-Stars despite reporting over 10% of its consumer loans as 90 days or more past due. In this instance, the majority of delinquent loans are at least partially guaranteed  by  the U.S. government. And, the majority of its loans (over 40%) are in single family homes, which are pristine.

That brings us to 2-Star Towanda State Bank, KS. In addition to having the third largest percent of delinquent consumer loans (mostly due to bad auto loans) of all community banks, Towanda has trouble with other loans as well, particularly residential real estate. Of the $5.673 million Towanda has invested in 1-4 single family first liens,  4.3% is 90 days or more past due or in nonaccrual status, and another 7.8% is in the pipeline at 30-89 days past due. Troubled loans combined with continual losses have secured Towanda a place on Bauer's Troubled and Problematic Report.