As we work to continue moving our particular cogs in the economic wheel, while practicing social distancing and self-isolating as appropriate, we have been surprised by a couple of  regulatory posts that have not made the news  due to everything else going on.

The first dates back to March 3rd. The Office of the Comptroller of the Currency (OCC) issued a statement celebrating the 155th Anniversary of Freedman’s Savings & Trust Company, Lexington, KY. More commonly referred to as Freedman’s Bank, this bank is historically significant as the first bank established to “provide economic opportunity to newly emancipated Americans”.

The 155th Anniversary marks this significance only, as the bank itself was short-lived. The economy after the war was volatile and coupled with a lack of sufficient oversight, the bank was closed in 1874—long before the FDIC came along with deposit insurance in 1933. Over 61,000 depositors lost nearly $3 million. Comptrollers (plural) tried for decades to return the lost deposits, but after years of waiting, they only regained a fraction.

It would take a full century for Congress to take up any kind of meaningful legislation aimed at helping minorities. The Community Reinvestment Act, passed in 1977, was aimed at preventing discrimination and redlining and promoting fair and unbiased investment throughout the  communities a bank services. While this helped, it was no panacea.

There is no mistaking the benefits that Minority Depository Institutions (MDIs) can, and do, provide to their communities. The OCC, champion for the nation’s first MDI, continues in that role as it seeks to strengthen both the CRA and MDIs themselves.

The FDIC, for its part, is seeking to reduce certain regulatory burdens for community banks. There are new reporting rules that it is trying to delay in light of the current situation. On the flip side, on Wednesday (3/18/20) it approved two controversial applications for deposit insurance: Square Financial Services, Inc. and NelNet Bank, both Industrial Loan Companies to be headquartered in the Salt Lake City, Utah area. Neither will be particularly “Community” oriented.

While we are happy to see de novo banks, we would prefer if they were community banks.   Certain minority sectors, including Black or African-American MDIs, would be well-served with additional financial institutions that cater to and are run and/or owned by them. In fact, according to FDIC data, at year-end 2001, there were 48 MDIs that were classified as Black or African-American. They had total assets of $5.033 billion. By the end of 2019, the number had been more than halved to 23 while total assets remained fairly steady at $5.240 billion (up just over 4%).

These numbers are far from consistent from the industry as a whole, which witnessed a 36% drop in the number of institutions but a 184% increase in total assets. The following chart not only shows this discrepancy, but also the wide gap between average assets at Black or African-American (Black/AA) owned banks and the rest of the nation’s banks. 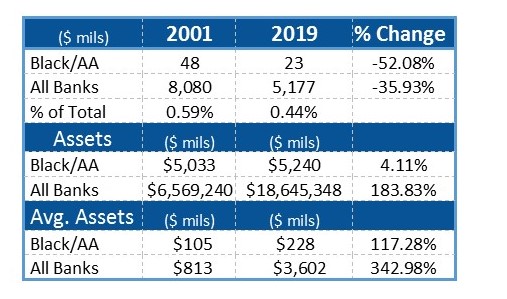 This discrepancy, in and of itself, indicates that this subset of the population, while possibly still distrustful of the system, would likely benefit from broadened CRA rules.

5-Star Liberty Bank and Trust in New Orleans could probably take the lead. Established in 1972, Liberty has acquired more Black/AA banks in the past 20 years than any other bank. Just reading its mission statement is an inspiration:

There’s real freedom here-the freedom you have as an individual to attain your goals, as a business to achieve your idea of success or even as a community that is gathering strength to reach its full potential…