An Economy on Hiatus

The majority of economic activity in the United States has been deliberately halted in an attempt to save lives. Nothing like this has ever been attempted and it  could takes months to learn the effectiveness of the decision.

Vital functions are still running but pretty much everything else has deliberately been put on hold. This is a stark contrast of how things were handled a century ago, but a lot has changed in the past 100 years. Most notably, many of us are able to work remotely.

Jerome (Jay) Powell, Chairman of the Federal Reserve, is providing much needed relief by opening up new avenues for financial institutions to stay liquid. He, along with Treasury Secretary, Steve Mnuchin, are infusing trillions of dollars into an economy at a standstill. Their efforts will enable banks and credit unions to offer:

that would otherwise not be available. These are in addition to the loans already provided. In fact, page 7 has a list of the 50 federal credit unions with the most Payday Alternative Loans (PAL)s  granted in calendar 2019. Given that they have already demonstrated their willingness to help their members, we are confident they will be eager to begin extending these new loans. As will community bankers that are  also looking forward to doing their part to help their communities get through this difficult time.

For its part, the National Credit Union Administration (NCUA) is making $4 million in loans and $800,000 in grants available to federally insured credit unions that are designated as "Low-Income". Low-income areas will be hit disproportionately hard from COVID-19 and these loans/grants will undoubtedly save lives.

From providing breakfast and lunch to school-age children to delivering food and medication to senior citizens, the NCUA seeks to help those who are most at risk. These funds can also be used for members' utility bills and loan payment relief, similar to PALs, but in this case must be specific to COVID-19. It is also extending relocation help so credit unions can set-up operations remotely.

These life-lines can't come soon enough. Unemployment claims for the week ended March 28th were a staggering 6.6 million. (If you recall from last week (JRN 37:13) the previous week's 3.3 million claims for unemployment was 3 million higher than the prior record.) Now it has doubled with no end in sight.

At some point, Americans will have to get back to work. The risk of economic collapse will eventually outweigh the risk of further contagion. Then and only then, will we begin to get a clear picture of the economic damage. We do know, though, that banks and credit unions have room to lend (and even lose) without risking their own health.

Since the Great Recession, the strength of this nation's financial institutions has improved tremendously. The aggregate equity capital ratio of U.S. banks in 2008 was 9.36%; today it is 11.32%. The Credit Union industry is slightly higher at 11.37%, up from 9.89% in 2009. That capital buffer will prove invaluable in the coming months.

They also have in their favor low loan to deposit ratios (or shares in the case of credit unions). That means they have the money to lend. And perhaps most important in this circumstance is that both banks and credit unions currently have excellent loan quality, as evidenced below. There's no doubt they will take a hit. Only time will tell how big. 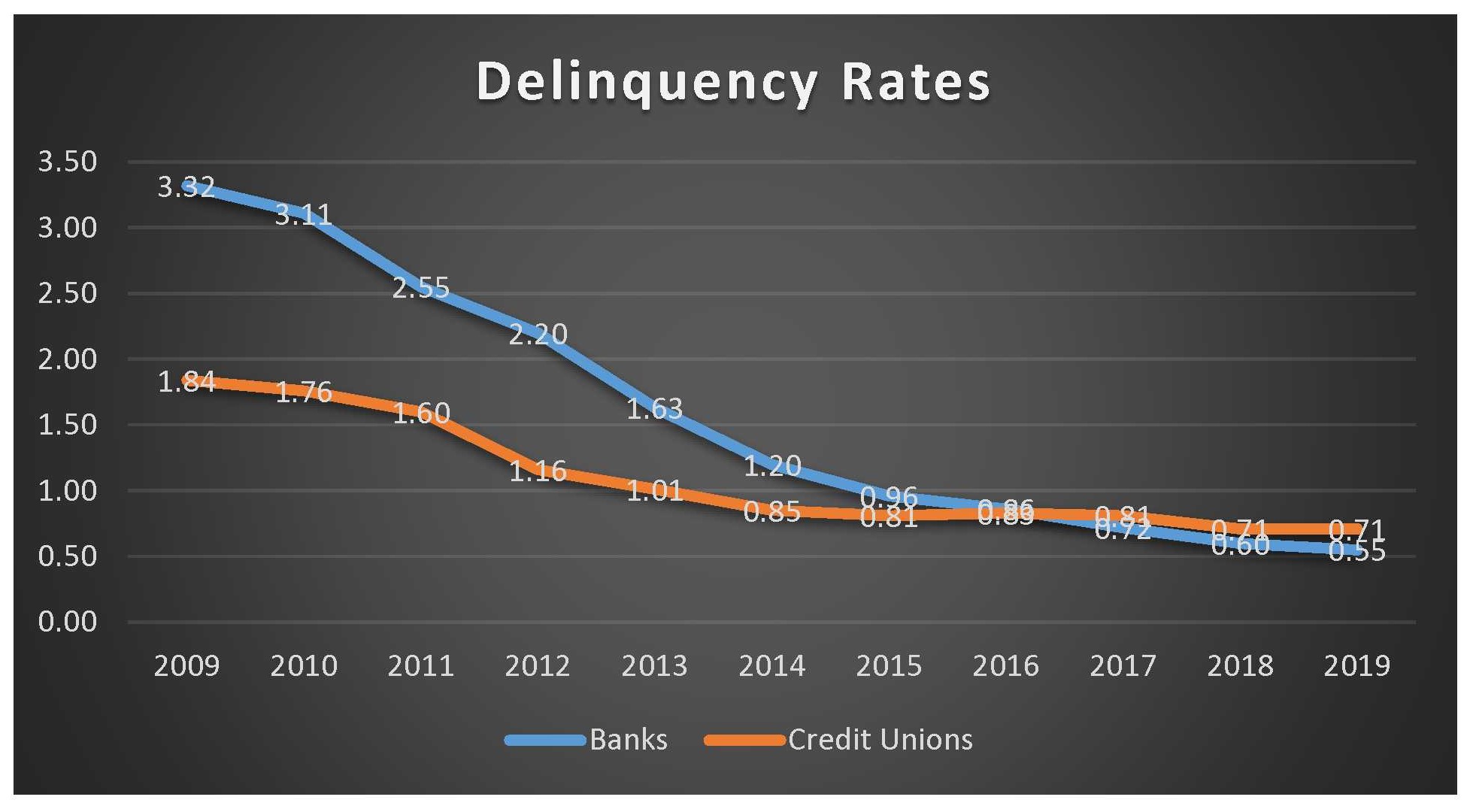