Joseph M. Otting steps down as Comptroller of the Currency effective Friday, May 29th. But before leaving, he made sure that years of work towards improving the Community Reinvestment Act had not been done in vain.

No one can deny that the 1977 CRA is outdated and in desperate need of an overhaul. Much has changed since 1977, not the least of which is the internet, but it goes all the way back to interstate banking. In 1977 banks were not allowed to operate branches outside of their home state without a separate charter.

That was prohibited until 1994. And that would have been a perfect time to revisit CRA, but there always seemed to be something more pressing on the agenda. In all fairness, with the advent of internet banking, it would still have needed another overhaul. The premise of CRA is pretty simple. Invest money back into the communities you service, paying particular attention to low and moderate income areas, when it is prudent to do so.

In fact, Ken Thomas, president of Community Development Fund Advisors in Miami, backs the OCC's revisions, calling it a "Robin Hood" where it aims to take deposits from branchless banks (from the rich) and reinvest them to help the poor.

In his words: "The proposed reforms adopted an innovative solution requiring branchless banks to reinvest some of their billions of internet deposits back into the big cities sourcing them, rather than benefiting their credit card friendly 'hot spot' home-office cities in Delaware, South Dakota and Utah." (i.e. the states with the most tax benefits for banks.)

We have to agree with Mr. Thomas. Where critics are worried that, for example, New York funds will be directed to Wall Street or other affluent people. The reality is that the funds would be earmarked for distressed areas. The OCC rule takes it even a step farther by reaching out to other rural areas and tribal lands.

Looking at chart A, the CRA change almost seems like a moot point since only 115 U.S. banks will be required to use the new CRA prescriptions.

But Chart B tells you exactly how deceptive that thinking is. While the OCC only regulates 21% of U.S. banks, it regulates 68% of the total assets.

The 115 OCC supervised banks with assets exceeding $2.5 billion, those required to comply, control almost two-thirds of total industry assets. This includes the really Big Banks like JP Morgan Chase, BofA and Wells Fargo. They also include credit card banks like Capital One, Synchrony and American Express NB. There is a LOT of money here that is sourced nationally and can be redirected to communities that need it. 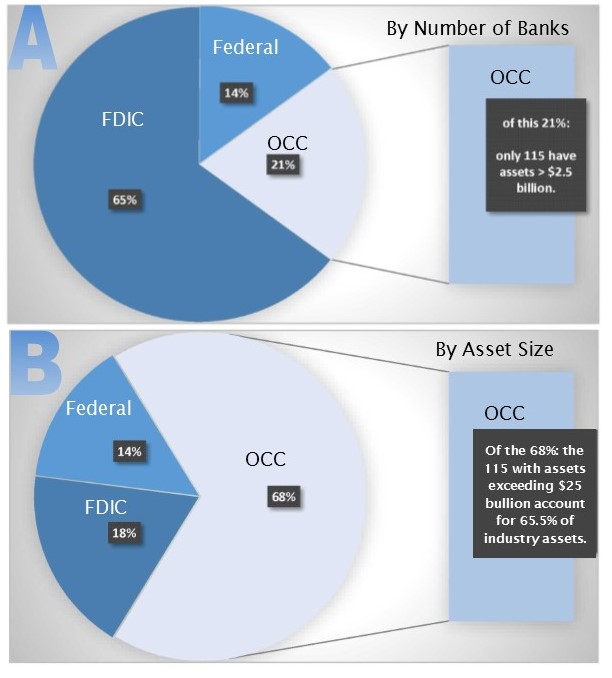