First quarter 2020 net operating income at the nation’s banks was $43.1 billion lower than a year ago. That’s a 71.6% drop, and the lowest number we’ve seen since the last recession. Some of that decrease can be attributed to increases in loan loss provisions, but not nearly as much as we’d like to admit. 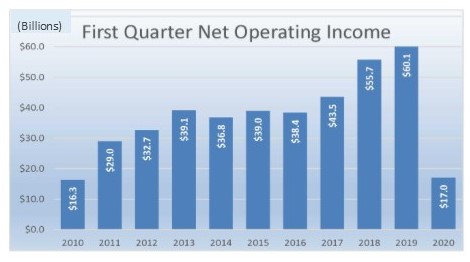 First quarter net charge-offs of $14.6 billion were nearly 15% higher than a year ago. Over two-thirds of the increase was in Commercial & Industrial loan portfolios.

Noncurrent loans (90 days or more past due or nonaccrual) were up $7 billion (7.3%) with all major categories reporting increases. But, at 0.93%, the FDIC is calling that “stable”. Forty-six percent of all banks reported increases in noncurrent loan balances.

Things could be worse, but as you know, the banking industry has been beefing up on capital in recent years. It has a sizeable cushion to soften the blows that will inevitably be heading its way in coming quarters.

Assets, loans, deposits and capital levels were all up from the previous quarter and the previous year as follows: 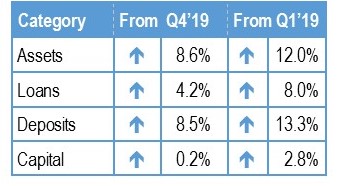 Based on March 31st financial data, only 12 banks failed to meet the requirements for a “Well-Capitalized” designation (as defined for Prompt Corrective Action (PCA) purposes). However, there are 54 banks on the FDIC’s “Problem Bank List”. There are currently 59 banks on Bauer’s Troubled and Problematic Report.

The 50 banks that registered the largest percent year over year decrease in net income are listed on page 7. In addition to the 1st quarter income for both 2019 and 2020 and the percent decrease, we also included the first quarter 2020 loan loss provision alongside an average of what each bank set aside during the four quarters of 2019. That way you can see whether or not the loss provision was a significant player.

We now have March 31st financial data for all FDIC-insured banks, including the nearly 500 late filers. After being excluded for the past two weeks for lack of new data, all JRN listees that qualify have now been added back to our weekly surveys.