Credit Union Data and Ratings are (finally) Out

The NCUA told us we wouldn’t be able to get the full first quarter credit union file until the first week of July. Sadly, they were right, but we have been working day and night for several days to get it ready for you as quickly as possible. Here are some of the highlights:

The aggregate Capital Ratio of 11.01%, while down 36 basis points from year-end, is still enough to provide most credit unions with a nice cushion for the months to come. Most being the key word, because not all financial pictures are as pretty as that. In fact two have negative capital ratios making them “Critically Undercapitalized” by regulatory (or Prompt Corrective Action—PCA) standards (see page 7). There was a third, but it has already been closed by the NCUA.

The vast majority of the nation’s credit unions - 98% - reported a capital ratio of 7% or higher at March 31st. Seventy-one percent exceeded 10%. Looking at the components of the ratio, aggregate assets increased 8.8% during the 12 months ending March 31, 2020, mostly due to an increase in loans. The corresponding 7.5% increase in net worth/capital brought the ratio down a bit.

Some credit unions participated in the Paycheck Protection Program (PPP) but most of those loans were made after the first quarter closed. Even so, credit unions witnessed a 16.5% jump in commercial loans from March 31, 2019 to March 31, 2020. All major loan categories had balance increases, but none of the others were so great. 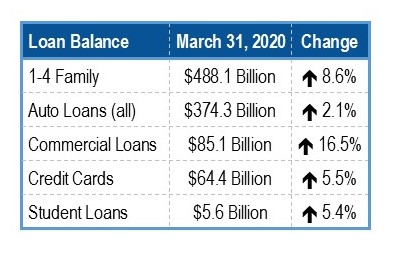 The delinquency rate increased in all major categories as well. 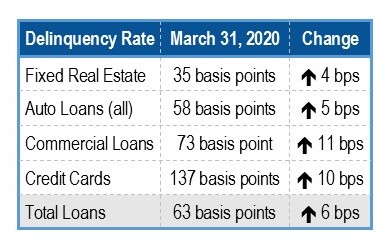 Certainly not a surprise here, but something we will be monitoring.

There are now 106 credit unions rated 2-Stars or below and therefore relegated to Bauer’s Troubled and Undercapitalized Credit Union Report. While that accounts for just 2% of the industry (by number and less than half of a percent of industry assets), the number is up from 1.96% a quarter earlier. All that are rated 1-Star or below and/or are less than “Adequately-Capitalized” as of March 31st are listed on page 7.

On the flip side, almost 84% of the nation’s credit unions are rated either 5 or 4-Stars and therefore recommended by Bauer. Over 90% of U.S. banks also earned recommended ratings from Bauer with March 2020 data. The strength of these industries will prove  immensely important in the coming months. The Office of the Comptroller of the Currency (OCC), in its Semiannual Risk Perspective also emphasizes the importance of this strength. The following excerpts apply as much to the nation’s credit unions as they do to the banks. (Paraphrased)

In light  of these new challenges, institutions need to update procedures, particularly in areas of debt collection and loan work-outs.

They need to continue to boost loan loss provisions in accordance with their portfolios.

And, continued vigilance is needed to stay ahead of cyber criminals.

No one expects this will be an easy road, but we are very fortunate that we started from a position of great strength.