Consumers Focus on Paying Down Debt

Housing takes, by far, the largest bite out of most consumers’ wallets, at least in this country. That’s followed by student debt, automobile loans and then, finally, credit card debt. And, according to the Federal Reserve Bank of New York’s Center for Economic Data, the second quarter of 2020 marked the first decline in household debt since 2014 (and largest since 2013).

Even while Mortgage Debt increased (as people took advantage of ultra low interest rates and other mortgage originations increased to a level not seen since the last refinance boom in 2013), and in spite of the fact that student debt and auto debt remained largely unchanged, consumer debt still dropped.

If there is any silver lining to the pandemic or the resulting social distancing and shut-downs, it would have to be that Americans (myself included) are paying down credit card balances.

The delinquency situation at this time, however, is tricky, at best. COVID-19 relief went into effect beginning with second quarter data, allowing forbearances and other work-arounds that actually removed some accounts from the delinquent column that had been there, and rightly so, in the first quarter.

Some of these relief efforts are temporary, which means that eventually the accounts could migrate back into delinquency. However, if the consumer successfully reworks the loan(s) with the lender, and sticks to the conditions of the new contract, they can avoid that fate.

This is something our analysts will be grappling with over the next several quarters. We mention it because some accounts reported as delinquent on March 31, 2020 may possibly be categorized differently with June data, even though there’s been no material change.

Given that caveat, there are 53 banks with consumer loan exposure of at least 10% of total loans that also reported at least 2.5% of those consumer loans as 90 days or more past due at March 31st. They are listed on page 7. As we did last week, we listed the banks’ Bauer’s Adjusted Capital Ratio (CR) next to its Leverage Capital Ratio. A Bauer’s Adjusted CR that is the same as the Leverage CR indicates zero delinquencies. As delinquent loans climb, the gap between the two numbers gets larger.

You’ll notice some, like 3½-Star Comenity Bank, Wilmington, DE, report 100% of their loans as loans to consumers. Comenity is one of 11 U.S. banks with a credit card specialization. All 11 will automatically qualify for the first half of the criteria, but only those reporting at least 2.5% of them delinquent are listed on page 7.

The data used for the two charts to the right came from the Federal Reserve Consumer Credit Statistical Release (G.19) that was published on August 7th. The first chart really drives home the point that Americans are reducing their credit card debt. We are very happy about that.

But the second chart shows how far we have yet to go. While total outstanding revolving credit has decreased, it is still higher than it was in both 2016 and 2015. 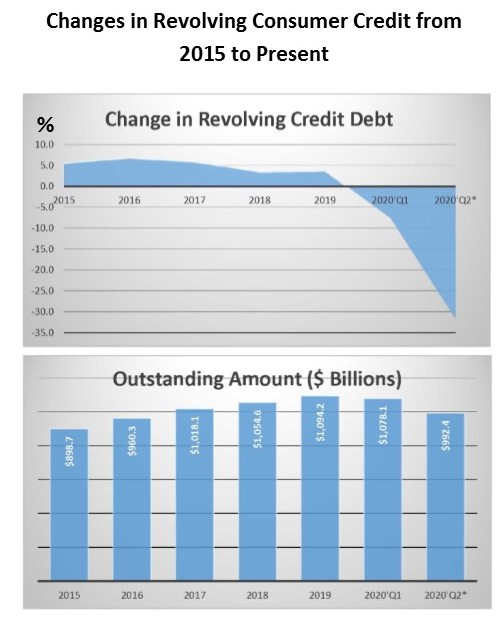 0 comments on “Consumers Focus on Paying Down Debt”