Bank Star-Ratings have all been updated based on June 30, 2020 financial data. (Credit Union Star Ratings will be out in a couple of weeks.) We’ve been doing this a long time, and we’ve seen the banking industry go through its ups and downs. Admittedly, sometimes the downs were their own fault.

Often times, these downs were restricted to either a specific type of lender, as in the case of the housing bubble burst circa 2008. Other times its been more regional, like the speculative savings and loans in and around Texas in the 1980s. This is where (and why) the Texas Ratio was conceived.

In every instance, the industry comes out a little bit smaller, a little bit stronger, and we hope, a little bit wiser. But this is the first time, at least in my memory, that the economy, and hence the banks, have faced such a confluence of events. In addition to the pandemic, many cities are dealing with riots in the streets, wildfires have destroyed swaths of land out west, and Acts of God, such as Hurricane Laura in the Gulf and a rare derecho event in Iowa, have devastated residents and businesses in those areas.

In spite of all of this, and in spit of setting aside $61.9 billion in loan loss provisions, our U.S. banks are holding up remarkably well, thus far. While not a stellar earning quarter, the industry did report $18.8 billion in net operating income in the second quarter. Yes, that’s 70% lower than a year earlier, but given the circumstances, it isn’t bad. 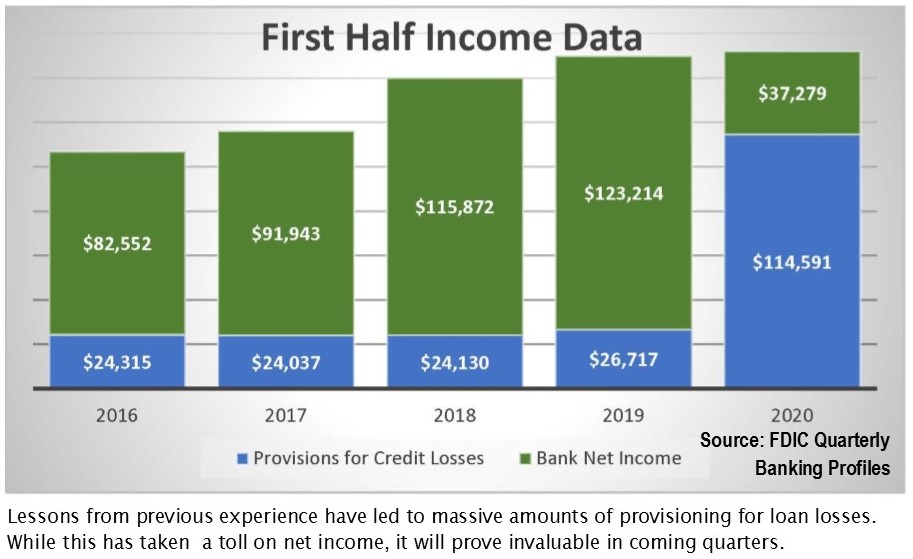 When we take the Big Banks out of the equation and just focus on Community Banks, the numbers get even better. After putting aside $2.4 billion for loan losses—a 273% increase from last year, the nation’s 4,624 community banks still registered a 3.2% increase over last year’s 2nd quarter net income. More than half of all community banks reported higher net income than a year ago.

We know loan quality will be taking a hit, but so far, only minor cracks are beginning to show. For example, the noncurrent rate (90 days or more past due + nonaccrual loans) was up 15 basis points in the quarter to 1.08% and total noncurrent loans increased by $15.9 billion (15.5%). The net charge-off rate increased by 7 basis points during the 12 month period (to 0.57%).

Of greater concern right now is the net interest margin, which, at 2.81% is the lowest level ever reported (since the FDIC began tracking). Looking at the data, 837 banks (16.6% of the industry) reported interest margins on earning assets below 3%; 93 banks were below 2% (see chart). You expect this ratio to be low for de novos; it’s all part of the growing process. But that only accounts for a few (like ***½ Gulf Atlantic Bank in Key West, FL, est. April 13, 2020, or ***½ Founders Bank, Washington, DC, est. March 30th). They have to attract deposits before they can make loans. With the Federal Reserve announcement last week it will keep interest rates near zero for the foreseeable future, making money on interest margins is not going to be easy, de novo or not. 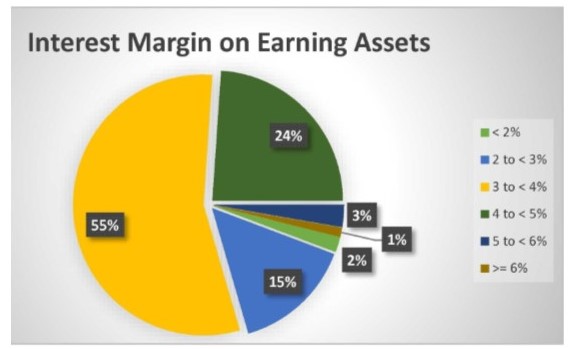 All star ratings and financial data on our rate pages are now updated based on the June numbers.