We have been focusing quite a bit lately on commercial real estate (CRE) ghost malls and the like, and with good reason. But, imagine a scenario where a bank had 56% of its loans in CRE and another 26% in Commercial & Industrial (C&I) loans. Actually, you don't have to imagine.

That's what Zero-Star United Bank of Philadelphia reported at June 30th. It has a meager 11% in 1-4 family residential loans and less than 2% in consumer loans. In fact, when you add in Construction and Land development loans, 87% of the bank's total loans are at tied to the success of small businesses.

That might not be so bad in a better economy and if the bank had stronger underwriting. But neither is the case. United Bank of Philadelphia has a negative Bauer's Adjusted capital ratio and delinquency to asset ratio over 7%. It has earned Zero-Stars since 2016 and is operating under an enforcement action (FDIC), the goals of which have remained well beyond reach.

There are 50 banks, including United Bank of Philadelphia, with at least one-quarter of total loans invested in C&I loans that have also witnessed greater than 10% growth in these loans over the 12 month period ended June 30, 2020. Each also reported delinquent C&I loans (90 days or more past due) in excess of 2.25% and total delinquent loans of at least 1.5%. These banks can be found on page 7.

Of the 50, United Bank of Philadelphia is the only one rated Zero-Stars, but there is another on Bauer's Troubled and Problematic Bank Report. 2-Star Cornerstone Bank, Atlanta, GA, like United, has over 80% of its loans beholden to small businesses.

We have provided the loan breakdowns of these two banks on page 2 along with their peer groups for comparison purposes. The right way versus the wrong way to diversify your loan portfolio. 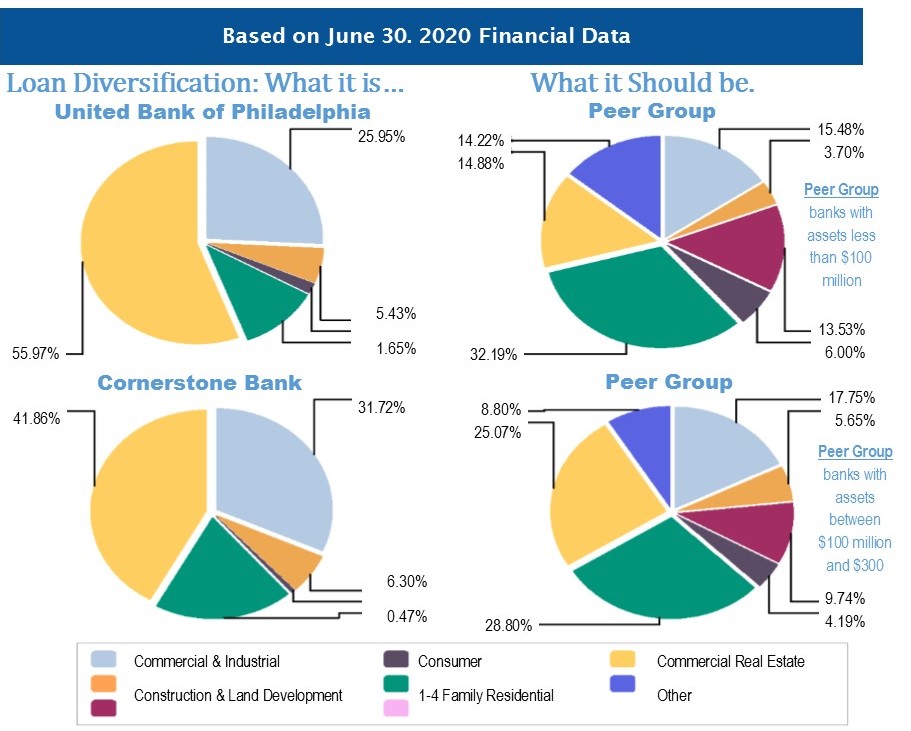