Maybe We Needed a Little Boring

If that's the case, the Federal Reserve did not disappoint. The Fed Funds rate remains near zero-where it's been since March. And there is virtually no chance of that changing anytime soon. That means we are stuck with CD rates that are lower than the target inflation rate.

For our part, we are adding new banks to our rate pages, trying to get you the best rates we can... even if many of the banks are now accepting local deposits only. We figure, the more banks we list, the better your odds are of staying completely FDIC-insured. That could prove invaluable in the coming months.

This year, a combination of low deposit rates, employment insecurity and influxes of cash (whether from stimulus checks, PPP or SBA loans) a lot more money is going into noninterest bearing deposits than usual. And that's okay. The FDIC insures all deposits as long as you stay under the limit. In general, that limit is $250,000 per person per institution. However, there are ways to increase that coverage. Use EDIE, the FDIC's Electronic Deposit Insurance Estimator to try different combinations that might yield higher coverage if needed.

Most of the banks look more like the following, although we didn't have room to include all of these numbers on page 7:

It's an interesting phenomena and something we have never seen before. But, that seems to be the theme of 2020.

We mentioned we are adding new banks to our surveys. In fact, there are two this week (on page 5 in blue). We also made some updates to our rate pages that were probably long overdue.

As a result of these changes, the status column is now simply "Area" and will be marked with L for local deposits only or N if the banks accepts deposits nationwide.

We also replaced the Average Tangible Assets column with Total Assets this week. As a general rule, total assets is a more recognized valuation than average assets. One other change that actually happened last quarter is in the risk-based capital ratio (RBCR). You will notice that some banks have an N.A. where the RBCR used to appear. If the bank has elected the new Community Bank Leverage Framework (CBLR) for its quarterly Call reporting, it is no longer required to report risk-based data. As a tradeoff, the Leverage Capital Ratio requirement is substantially higher for those electing the CBLR format. 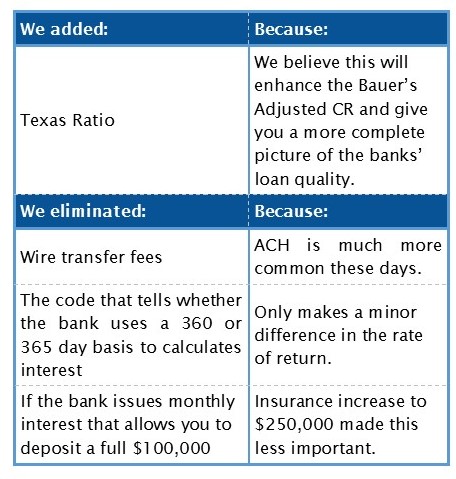 While we believe all of these changes are good and beneficial to our readers, we do regret not asking you if there is anything else you'd like to see-whether on the rate pages or in a list/article. Feel free to send requests to cjervey@bauerfinancial.com. If we can, we will oblige.