All New Bank Ratings and Data

September 30th bank data and ratings are out and while net income for the industry as a whole ($51.2 billion) was up 173% from second quarter, it was still down 10.7% from last September. It is really a tale of two types of banks though, as community banks were able to increase their net income by 10% year over year.

Lower net interest income cannot be avoided with interest margins at a new record low of just 2.68%. But community banks are selling loans to keep them in the black.

While interest income is decreasing, noninterest expense is increasing. This increase is attributed to a $3.7 billion (or 6.6%) increase in employee wages and benefits, which may seem odd given the year we’ve been having, but it was necessary. Our bankers have been working hard. In fact, assets per employee increased $1.3 million over the 12 months. Assets per employee now average $10.2 million!

Separating them out again, community banks witnessed a 9.8% increase in salary and benefits and an increase of 14.4% in assets per employee to $6.3 million—the highest since the FDIC has tracked it, and we feel comfortable saying it is the highest ever.

Loan balances fell slightly (0.8%) from second quarter when you look at all banks but rose slightly (1.0%) at the community bank subset. Broken down: 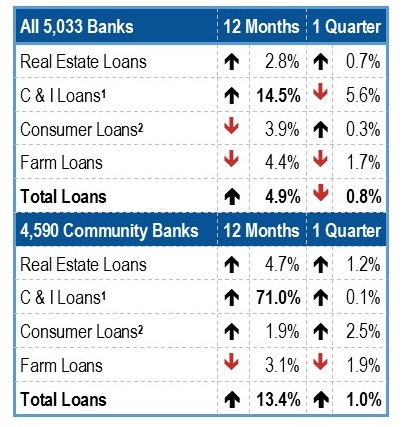 It’s clear to see that community banks have been front and center helping their neighbors. In fact, nearly 85% of all community banks were active participants in the government’s CARES Act Paycheck Protection Program, although to varying degrees. Those with the highest dollar volume outstanding at September 30th are listed on page 7. Three community banks loaned more than $1 billion each. In each of these cases, outstanding PPP represents less than 15% of total loans.

Conversely, 3½-Star Quontic Bank, Astoria, NY extended more than 24,000 PPP loans, the highest number of any community bank. While the average dollar amount was much lower than some of the others, Quontic Bank’s PPP loans represent over 70% of its total loan portfolio. There are 14 other community banks where PPP exceeds 50% of total loans. The one with the highest PPP to total loans is 4-Star CBW Bank, Weir, KS with over 89%. You won’t find CBW on page 7 because it is a very small bank with less than $100 million in assets. Its total PPP of $47.898 million, while impressive for its size, cannot compare with the larger community banks listed.

You’ll notice we also included Bauer’s Adjusted Capital Ratio and the Texas Ratio on page 7 to show you that loan quality is still holding up quite well. After a massive bolstering of loan loss provisions last quarter, third quarter provisions of $14.4 billion were up 3.5% from a year ago, but down 76.8% from the second quarter. This as the net charge-off rate decreased 5 basis points from a year ago. Credit card performance has improved, but C&I is taking a hit.

We do have other problems on the horizon, however. Residential mortgage loans, in particular, will be on our radar. As long as the pandemic continues to linger and Washington fails to agree on a relief package, more and more homeowners will become delinquent. Noncurrent loans on 1-4 family residential property rose 22% (over $10 billion) in the third quarter. Those increases were at Big Banks. Mortgage quality at Community Banks remains solid; C & I and Farm loans are the biggest threat to community banks’ bottom lines right now. That’s why community banks are selling their loans, in particular their C&I loans. Smart.