Loans: a Bank’s Best Asset, Until They’re Not

Although business models vary, the optimal loan to deposit ratio (LTD) at a bank is generally considered to be between 80% to 90%. At this level, the bank is lending sufficiently for its size, but not so much that its ability to meet other obligations would be compromised in the event of a downturn (or a pandemic).

As we mentioned, business models vary, so let’s take a deeper look into some of the banks listed. The first one, 3½-Star First FS&LA, Hazard, KY, has the highest LTD of 168.6%. It is a small bank (thrift actually) with one location in Hazard (population: 5,000) and the thrift has less than $90 million in total assets.

First FS&LA’s website would lead one to believe it has a well-rounded loan portfolio. It does not. True to the thrift model, its loans lean heavily toward single (1-4) family residential property. It may lean a bit too heavily, however, with nearly 80% of its portfolio in these home loans, which is where 100% of its problem loans can be found.

First FS&LA has in its favor is a Leverage Capital Ratio of 21.9%. That is is much higher than its peer group (12.5%) and will help cushion the blow should unemployment lead to foreclosures in the Hazard area.

The second bank listed on page 7 has a totally different situation. 3½-Star Legacy Bank, Hinton, OK, had an 89% LTD at March 31, 2020, but has experienced a surge in loan demand due to the Paycheck Protection Program (PPP). Total loans grew 110% during the 12 month period ending September 30, 2020 and Commercial & Industrial loans (C&I) now represent 54% of all loans. Total deposits grew less than 13%.

Legacy Bank’s delinquent loans rose more than 350% during the third quarter... almost all are C&I.

Established in 1902, Legacy Bank currently operates through ten branch offices and has over 160 employees. With total assets now approaching $800 million, Legacy is starting to feel a squeeze on its capital ratios (CRs). While its leverage CR is okay at 8.25%, its Bauer Adjusted CR of 4.3% and Texas Ratio of 43.8%, need to be watched carefully.

About halfway down the list on page 7, you will find 3-Star California Pacific Bank, San Francisco, CA. We chose to highlight it because of its high exposure to commercial real estate (57% of total loans) as this is one of our biggest areas of concern these days.

California Pacific Bank operates to the beat of its own drum, though. While it struggles with loan quality, its capital ratios are sky high. It has no consumer or farmland loans, which combined makeup about 20% of the loan portfolios of its peers. That means it has more exposure to riskier (CRE or Construction and Land Development) loans. That being said, it is well-reserved in the event of charge-offs. And, it continues to be profitable. In other words, it’s a solid 3-Star Bank. 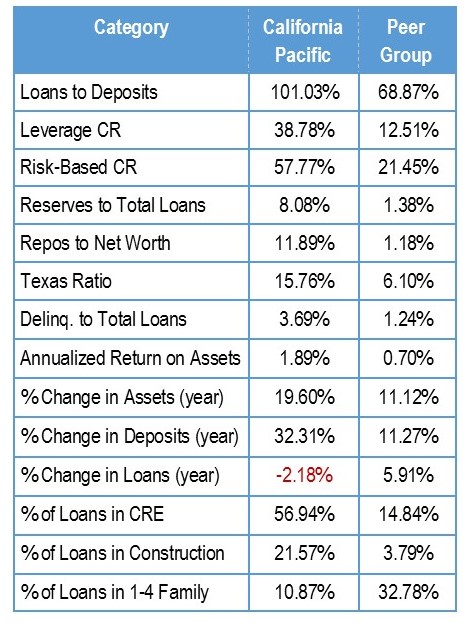