We know many small businesses were left behind in the first round of Paycheck Protection Program (PPP) loans. That’s why when the Treasury Department reopened the portal on Monday, it granted access exclusively to Community Financial Institutions (CFIs).

CFIs, which include Minority Depository Institutions and Community Development Financial Institutions, among others, only accounted for about 10% of all PPP lenders in 2020. So on Monday, January 11, 2021, CFIs had the unhindered ability to access the portal for First Draw PPP applicants.

On Wednesday, the pool was expanded to allow the same CFIs to accept applications from eligible borrowers that already received PPP loans in the first round. These would be Second Draw PPP applicants.

Second Draw loans will be limited to companies:

Unlike the 2020 version, the 2021 loans will NOT be approved immediately. That should prevent a repeat of some of the mistakes made the first time around. While some of the money that was loaned in error was returned, some was not. That kept funds out of the hands of those who needed it the most, and out of the hands it was intended for.

On Friday, January 15th, the portal opened to additional small lenders, but at least $15 billion has been set aside for the initial CFIs.

On page 7 we have a list of Minority Bank CFIs that helped their customers take advantage of the first round of PPP, and that are, no doubt, working hard at it again.

While minority banks like 5-Star East West Bank in Pasadena and 3½-Star Banco Popular de Puerto Rico have far more outstanding PPP loans from Round 1 than those listed on page 7 (each has over $1 billion), the 52 minority banks listed on page 7 have the most relative to their size (represented in the last column “PPP as a percent of total loans”).

They are also all Community Banks. In spite of their Minority Bank designation, East West Bank and Banco Popular, each boasting over $50 billion in assets, are not community banks at all. Our focus this week was on the combination—Minority and Community.

Nearly 83% of the nation’s banks participated in the first round of PPP last year. Minority Bank participation was slightly higher at 85%. Where MDIs total loan portfolio is only 1.74% of total bank loans, PPP loans granted by MDIs in the first round represented 2% of the total. MDI PPP loans tended to be smaller though. The average PPP loan from an MDI Community Bank was $80,000 while the average for the banking industry as a whole was over $105,000.

The FDIC updates its list of MDIs each quarter and the following represents the totals at September 30, 2020: 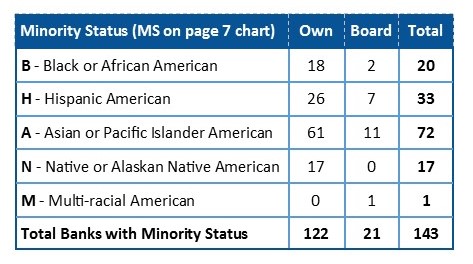 The designation can mean one of two things: either 1) the bank is owned by the designated minority OR 2) the board is filled with a majority of the specified minority AND the bank serves a minority community.

Regardless of which type it is, we are sure these banks are working diligently to get their customers their fair portion of the $284 billion that was made available as part of the $900 billion coronavirus stimulus package Congress approved in December.