Since the pandemic began, not only are Americans cutting back on new credit card purchases, many consumers have been working to lower their balances.

At the end of 2019, credit card balances at U.S. banks stood at over $941 billion. By the close of the third quarter, those balances were down 15% to $796 billion (see chart page 2). A 15% drop in nine months is highly remarkable, although evidence suggests that some of that pay-down was accomplished by way of other consumer loans.

With financial insecurity weighing on most everyone’s mind, open-ended, revolving credit cards, many with high interest rates, are no longer a convenience, but a burden. They’re another thing to worry about.

One thing bankers have not had to worry about is charging them off. Credit card net charge-offs decreased by $1.3 billion (or 15.9%) during the twelve months ended 9/30/2020. The net credit card charge-off rate at September 30th was 3.80%, although It was higher (4.38%) at the eleven banks categorized as “Credit Card” banks.

Granted, consumers have had help. Between government assistance and deferral and forbearance programs that were put into place in the early days of the pandemic. The numbers will not be this rosy like when these programs end.

In the meantime though, it’s looking quite good. Only 52 banks with $100,000 (or more) outstanding in Credit Card Loans also reported more than 2.25% of those credit card loans delinquent 90 days or more at 9/30/20. (They can be found on page 7 of the current issue of Jumbo Rate News.) Of the 11 banks with credit card specializations, four are on the list.

That’s a big improvement over the second quarter when 65 banks met these criteria, including six of the 11 credit card banks. The two credit card banks no longer in this situation are 5-Star Credit One Bank, Las Vegas and 4-Star Capital One NA, McLean, VA. While both, as credit card banks, meet the first criteria ($100,000+ outstanding in credit card loans.) They also both reported quarter over quarter improvement in credit quality and are very well reserved...just in case.

That’s where the similarities end.

Credit One Bank is 100% a credit card bank. It has no other loans on its books. Its leverage capital ratio is 38.5%, Bauer’s Adjusted CR is 37.7% and its Texas Ratio is 2.75%. If you put all of your eggs into one basket, you had better protect that basket. Credit One Bank is protecting its basket with a sizeable capital cushion. Its delinquency rate is 1.2%.

Conversely, while half of Capital One’s loans are consumer loans, only a fraction of those are actually credit cards. (The other half is divided Commercial Real Estate, Commercial and Industrial and “Other”). While it does have some diversity in its portfolio, with a leverage capital ratio of 7.37%, it does not have nearly as much of a cushion if things go south. Capital One’s credit card delinquency rate of 1.62%, while much higher than its overall delinquency to asset ratio (0.38%) is still not a concern to us at the moment.

The chart below shows credit cards 30-89 days past due as well 90 days or more delinquent. The 30-89 numbers is “typically” a leading indicator. But then, nothing is typical these days. 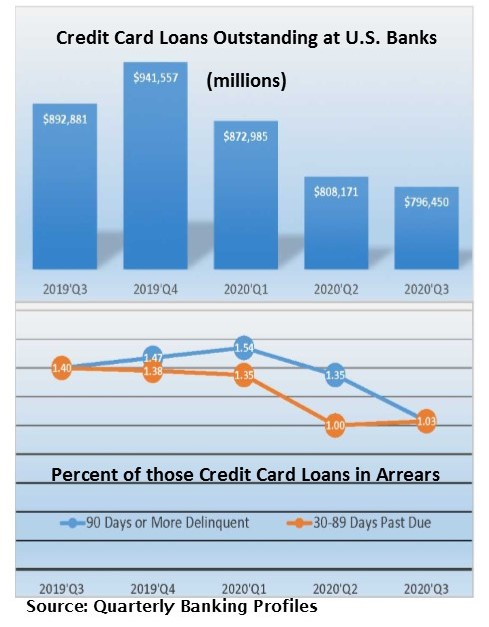