New Bank Data Shows Income Down Not Out

All bank star-ratings and reports are now based on year-end 2020 financial data. (Credit Unions will be updated soon.) Three new banks opened their doors during the fourth quarter, bringing the total number of de novos for 2020 up to seven. While that’s only about half of the 13 de novo banks that opened in 2019, it is impressive given current circumstances.

At 56, the number of banks on the FDIC’s “Problem Bank List” remains the same as the previous quarter but is up from 51 at the end of 2019. Bauer’s Troubled and Problematic Bank Report currently includes 63 banks, which is down from 66 last quarter and 65 a year ago. 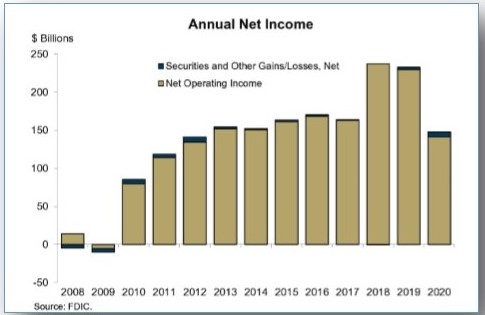 For the most part, those allowances were in the first half of 2020. Quarterly net income at 12/31/2020 was actually 9% higher than fourth quarter 2019. In fact, more than half of all U.S. banks reported year-over-year increases in net income. Many, if not most, did so while also increasing their loan loss allowances. The 50 with the highest year-over year increase in annual net income can be found on page 7.

One caveat to this list is that, in ordering by percent income growth, if they posted a loss in 2019, they were excluded. The first few listed were barely profitable in 2019, which is why the numbers seem so crazy. In any case, their boards are surely happy.

Another thing we should mention is that some of these banks were acquirers during 2020. If you look about half way down, 5-Star Border Bank, Fargo, ND reported large increases in net income, loan loss allowance and assets (not shown). That was due to the acquisition of Union State Bank of Fargo in December. Border Bank is an exception, though. The majority of the banks listed saw net income grow organically and generously.

Then there are banks like 2-Star Brighton Bank in TN. Brighton Bank, which even though it increased its loss allowance by a third, still has barely enough to cover half of its delinquent loans. While it has been working to reduce bad loans, Brighton Bank’s loan underwriting history has been what we will call “questionable”. But it is working on it.

A year ago, Brighton Bank’s nonperforming asset ratio was 3.9%; reserves were enough to cover just 39.5% of delinquent loans; Bauer’s adjusted capital ratio was just 3.12%; and its Texas Ratio was pushing 50%.

A pandemic and twelve months later and its delinquency to asset ratio is down to 2.2%; its reserves to delinquencies are 51%; Bauer’s adjusted capital ratio is 4.9%; and its Texas Ratio is under 30%. So, there is improvement.

You can find more information on Brighton Bank and all 63 banks rated 2-Stars or below by Bauer on our Troubled and Problematic Bank Report. A pdf version is just $99 Excel® spreadsheet with contact information is $225. Both are available for immediate download.