Membership growth slowed at the nation’s federally-insured credit unions in 2020, but that’s not surprising, as most of us were sheltering in the safety of our homes most of the year. Even so, they managed to gain 4 million new members over the course of the 12 months, ending the year with a combined 124.3 million members.

These members are divided among a smaller number of credit unions as industry consolidation continues. One hundred and thirty-seven federally-insured credit unions were lost to consolidation in 2020. This follows the same trend we’ve seen for the past several years.

Total industry assets rose by $278 billion or 17.7% ending 2020 at $1.84 trillion. (The 50 with the highest percent of increase can be found on page 7.) Much of the increase can be attributed to loans, which were up $55 billion (4.9%) from year-end 2019. However, not all loan categories grew, as Americans have been making great strides in paying down credit card debt, in particular, but new auto loans declined as well.

One area that we are watching carefully is commercial real estate (CRE). While the delinquency rate in most loan categories remained unchanged or dropped, delinquent CRE grew in 2020. While still a very manageable 68 basis points, 15.2% growth in this category is a lot. Underwriting standards are key.

When underwriting fails, or the unexpected happens, lenders should have provisions set aside to cover for loan losses. Loan loss provisions at federally insured credit unions rose $2 billion, or 30.8%, over the course of 2020. That was a major contributing factor to the $2.1 billion drop in net income from 2019. A drop in interest income and a rise in labor expenses also played important roles. An increase in non-interest income and lower interest expenses helped to soften the blow. 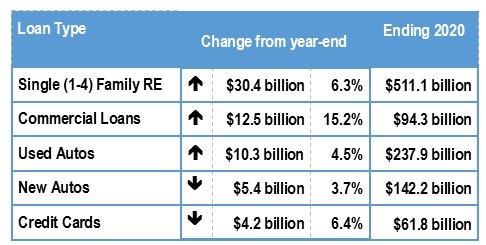 When underwriting standards slip, you see what can happen simply by looking at the first CU on page 7: Zero-Star Empire Financial Federal Credit Union, NJ. This credit union has had its ups and downs throughout its 44 year history. By the end of 2019, the $566,000 asset credit union was undercapitalized, the following quarter it was worse: significantly-undercapitalized.

Some new-found capital and a pandemic sent the credit union on a lending binge. Total loans grew from $378,000 to over $2.6 million during the second quarter of 2020. Sadly, when a credit union only has 200-300 members, especially if those members are located in one of the hardest hit areas of the pandemic, some loans may (and apparently did) get approved that should not.

In the second half of 2020 alone, Empire Financial’s delinquent loans grew from $5,000 to over $1 million. Mind you, it’s only a $3.5 million asset Credit Union. With a 12.54% capital ratio, regulators consider it “well-capitalized”. However, those delinquent loans bring its Bauer’s adjusted CR to -38.2%. That’s the result of just ten bad loans; another 14 loans are in the pipeline, reported as 30-59 days past due. Empire Financial only has $28,000 reserved to cover for loan losses.

That’s the exception, though. The majority of the fast growers listed on page 7 are doing well. You’ll notice many of them are rated 5-Stars or 4-Stars. There are also several that are not rated (N.R.) because they are either too small (less than $1.5 million in assets) or too new (established less than 5 years ago). Bauer does not rate these credit unions.

Aside from those, all bank and credit union star ratings have now been updated at www.bauerfinancial.com. There are currently 123 (or 2.3% of the industry) Troubled and Problematic Credit Unions, those rated 2-Stars or below. That’s up from 114 Last quarter and 107 a year ago. But the majority of the industry is still rated quite well. Over 83% of the nation’s credit unions are recommended by Bauer (rated 5-Stars or 4-Stars). Go online and find out how your financial institutions rate. Make sure yours are in the top tiers and not the bottom.