Financial Inclusion: We Can All Play a Part

The FDIC launched the pilot of a new public awareness campaign last week (April 6th) on the benefits of having a bank account. The pilot targets the Houston and Atlanta areas, where it confirmed that both Black Americans and Hispanic Americans are disproportionately unbanked.

The #GetBanked initiative actually began a year ago, at the beginning of the Covid pandemic, in the hopes of getting stimulus payments to consumers faster and more securely through direct deposit. Good idea; bad timing. Bank employees were consumed with PPP loans. And, in the event one could open an account online at that point, stimulus payments were sent to accounts or addresses that were already on file.

So, here we are a year later. The FDIC still has the initiative in its back pocket and wants to put it to use. Not only that, but its bi-annual report: How America Banks (based on 2019 surveys of roughly 33,000 U.S. households) revealed that about 5.4% of U.S. households are completely unbanked. That means that in over seven million U.S. households, not one person has any type of savings or checking account.

Granted, the percent of unbanked has declined steadily since it peaked in 2011 at 8.2%. The FDIC credits improvements in socioeconomic conditions for about two-thirds of that improvement. Of course both bank account ownership and economic conditions are fluid, so it will be interesting to see what effect the pandemic will have on these numbers. In the meantime, this is the most current we have.

It’s interesting. Over half (56.2%) of unbanked households say they have zero interest in ever having a bank account.

The reasons most cited were:
Not enough money to meet minimum balance requirements;
Mistrust of banks; and
Privacy issues.
High and/or unpredictable fees were also near the top of the list.

Recent declines in the rate of unbanked does show there is interest in the other 44%, though. While the declines have been particularly sharp in Black and Hispanic households, they remain much more elevated than others. They are also more elevated in the South. Hence, the focus on Houston and Atlanta.

Three other factors play an important role: income, income stability and education level. And, according to the data provided, Native Americans are the least banked ethnicity at 16.3%, followed by Black/African Americans (13.8% and then Hispanics (12.2%). 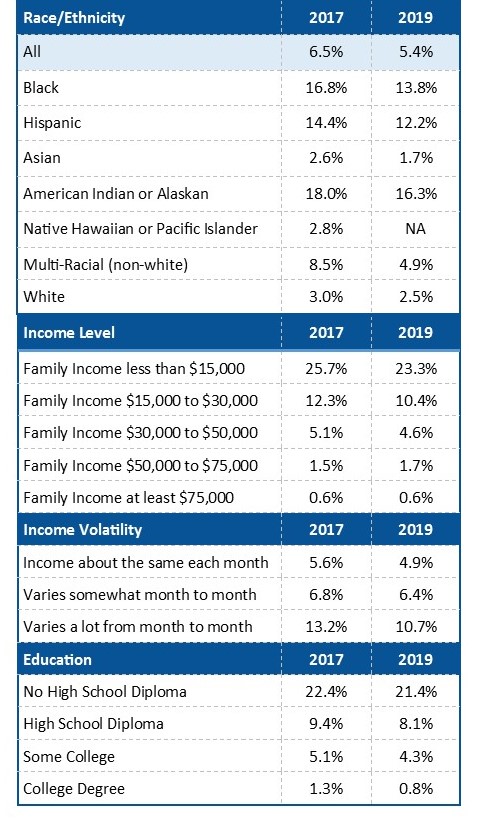 At the other end, at just 1.7%, Asian Americans out-bank every sector, including whites. (We’ll have more on that next week.) This week’s page 7 lists all Black and Hispanic-owned U.S. banks. Where trust is an issue, unbanked families of these ethnicities may feel more comfortable banking with one of these institutions. But they’re not the only ones. Money has been flowing steadily into many of these banks for months. In fact, 2020 was a record growth for 4-Star Mechanics and Farmers in NC. Supporting these banks is one way we can all come together in these conflicted and trying times.