Mergers and Acquisitions have claimed more than 225 banks since January 1, 2020. That represents over $174 billion in assets and $140 billion in deposits in less than an 18 month period. Several centenarians are among the banks lost leaving an emptiness as well as an opportunity.

The largest bank lost in that time-frame was $34.5 billion IberiaBank, Lafayette, LA, a staple in Iberia Parish since 1887. During the Savings and Loan crisis of the 1980s and 90s, IberiaBank, then a savings and loan (or thrift) itself, helped both regulators and the community by taking on three failed Louisiana thrifts. The growing institution then changed to a state savings bank charter in 1992.

In the late 1990s it acquired two more local banks. It wasn’t until the turn of the 21st century that a now federally chartered IberiaBank began looking outside of Louisiana for acquisitions. Its voracious appetite consumed banks from all over the Southeast—from Georgia to Texas—including several in Florida.

Now, in what is billed as a merger of equals, IberiaBank’s 300 plus locations call Tennessee home as the 4-Star First Horizon Bank, Memphis is the surviving entity.

Here’s where the opportunity comes in for other local banks to grab market share. Let’s say, for example, you live in Crowley, Louisiana. In 1989 your bank failed and was taken over by IberiaBank. You’ve been happy with IberiaBank for 30 years and have seen no need to shop for another bank.

But now, you have an out-of-state bank, and you wonder why. There are five other Louisiana banks operating in Crowley, including two 5-star banks (5-Star Bank of Commerce & Trust Co. and 5-Star First National Bank of Louisiana) headquartered right in Crowley. You might use this as an opportunity to switch (back) to a local bank where you know your deposits will be put back into the community. Local bankers should be knocking at your door.

The second largest bank lost by acquisition in the past year (June 2020) was $16.6 billion asset South State Bank, Columbia, SC, which merged into 5-Star CenterState Bank, Winter Haven, FL, but kept its name. (Dime Community Bank in NY used this technique when it was acquired by BNB Bank in February (JRN 38:21). Its name is still Dime Community Bank.) Winter Haven is pretty much at the center of the state of Florida, so going with South State Bank makes sense.

The new, larger South State Bank is already ruffling feathers, not in Florida, but in its home state of South Carolina. Almost immediately after the merger, the bank announced it would be closing/consolidating five South Carolina branches along with nine others. One of the branches slated for closure is directly across the street from the Medical University of SC in Charleston.

To use anything other than an ATM, students and staff must travel away from the university’s campus. Even then, of the 25 banks operating in the city of Charleston, only six are headquartered in the Palmetto State and only two of those are headquartered in Charleston. The others hail from as close as Raleigh, North Carolina (5-Star First-Citizens B&TC) to as far away as South Dakota (4-Star Wells Fargo Bank).

Speaking of First-Citizens, on page 7 we have provided a list of banks that have acquired more than one bank during the period January 1, 2020 through the present. Bancorpsouth and First-Citizens are two Big Banks on the list, gobbling up more community banks.

First-Citizens currently operates through 534 offices in 19 states. Over 43% (231) are located in its home state of North Carolina. It also has 126 branches in South Carolina. In both states it faces steep competition from other Big Banks, like 5-Star Bank of America and 4-Star Wells Fargo, among others.

The majority, though, are community banks making strategic alliances with other community banks so they can continue to compete in an increasingly difficult environment. 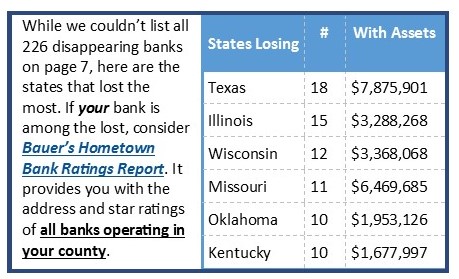