Remember Inflation? Get Ready for a Comeback.

Be careful what you wish for. The Federal Reserve has two goals: to achieve maximum employment and price stability, which it has defined as 2% inflation. However, since inflation (excluding food and energy) was running well below 2% during the twelve month period ending March 31, 2021, the Fed says it will allow a higher rate of inflation in the coming months. It may get more than it hoped for.

Consumer prices rose by 5% (annually) in May after an annual increase of 4.2% in April and 2.6% in March. These are the highest rates we’ve seen since 2008 (13 years ago) and while they pale in comparison to the hyperinflation of 1980—when it peaked at 14.8% - the mechanisms are in place for it to go much higher than where it is today. But what will inflation look like in the 2020s?

We’ve already gotten a glimpse with housing and lumber prices that have skyrocketed due to supply issues. While the Federal Reserve does not seem too concerned yet, it has changed its outlook and now expects to begin raising rates sooner than it did (by late 2023 as of its June meeting).

What we remember from the 1970s and 80s was that housing prices rose quickly. Then they dropped. This left thousands of upside down mortgage holders, meaning they owed more on their home loan than the house was worth. Can this happen again today? You bet.

If it does, will people walk away from the homes, as they did in 2008? Will they sell and take a big loss? Or, will they stay and continue to pay until the mortgage is back in its full, upright position? We would expect more of the latter this time around. One reason is that U.S. Consumers have beefed up their savings thanks, in part, to government stimulus. And we don’t expect unemployment to rise like it did in 2008.

In fact, not only do we expect at or near full employment, we are also looking for wages to increase. In fact, some big banks have raised their minimum wage to $15 or more per hour. And some community banks and credit unions have followed suit. They have to. Not only to attract talent, but also to retain it.

Bank of America recently announced it will be raising its minimum hourly rate to $25 by 2025. That’s going to make it tough for competing institutions with smaller pockets. In 2019, U.S. banks employed more than two million full-time equivalent employees with an average salary (plus benefits and bonuses) of $108,187 per employee (that’s all banks and all employees). In 2020 those numbers went up, in spite of the pandemic and bank employees earned $115,052 on average—a minimal increase in employees (0.12%) but a 6½% increase in wages and associated costs.

Annualizing the first quarter 2021 numbers, the industry looks to be on track for a similar increase in both employees and in salary and benefits. But with only first quarter numbers, we hesitate to project what those increases will be come year-end. We can tell you that the 50 community banks listed on page 7 reported the highest average wages and benefits for the first quarter. The range for these top 50 is from $185,00 a year to $379,000—much higher than the aforementioned averages. Remember, these averages are for all employees, including officers of the bank. They do not include any wage increases that were not already in effect in the first quarter.

According to The FDIC’s Quarterly Banking Profile, salaries and benefits were up $6.2 billion or 10.6% in the first quarter for the entire banking industry. For community banks alone, the increase was $838.1 million or 9.6%. Either way, it was welcome increase for employees and a jump in noninterest expense at our nation’s banks. 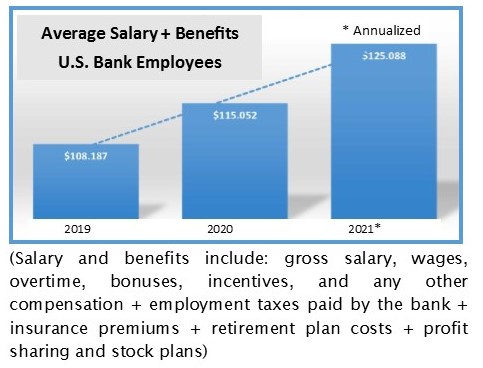