Two-thirds of the industry gone in less than 40 years. But, last summer (July 9th to be exact), President Biden called on the Justice Department as well as bank regulators to “provide more robust scrutiny” of these mergers.

He gave them a deadline of not later than 180 days (from July 9, 2021) to adopt a new plan that would revitalize bank merger oversight. The goals are: a) ensure Americans have choices among financial institutions, and b) guard against excessive marker power.

So, the question we have is, did BMO Financial (parent of the mega-bank 5-Star BMO Harris Bank, N.A., Chicago, IL) wait too long to come to an agreement to acquire 5-Star Bank of the West, San Francisco, CA? Or, will this merger get rubber stamped as a matter of course, just as hundreds have before it?

BMO Financial, whose parent is Bank of Montreal in Canada, has apparently had its eye on Bank of the West for years, but a deal was just announced on December 19th. And, it’s huge.

Already the 19th largest bank holding company in the nation, BMO Financial has $193 billion  in assets. Of that, $166 billion belongs to BMO Harris Bank, making it the 24th largest U.S. bank.

Bank of the West, another foreign-owned bank, (owned by BNP Paribas, Paris, France) is the 35th largest U.S. holding company—BNP Paribas USA in New York City. The combination of these two Big Banks would propel BMO Financial into the 14th slot by size, with $343 billion in assets. That will put it behind Capital One and, perhaps more importantly, it will still remain behind its Canadian rival, TD Group (out of Toronto). With $514 billion in assets, TD Group sits comfortably at #11.

The largest bank acquisitions of 2021 are listed on page 7. If approved, this merger will not only dwarf them all, it will be one of the largest acquisitions in years. But we do have to wonder about the timing.

BMO Financial CEO, Darryl White, seems confident it will be approved. Looking at Bank of the West’s 538 and BMO Harris Bank’s  535 branch locations, we see possible overlap concerns in Arizona, Minnesota and Missouri. Of those, Arizona will most likely be scrutinized the most as it already lacks competition. Seventy-one banks currently have branches in the Grand Canyon State; only 13 call it home.

As we already mentioned, the largest 50 bank acquisitions of 2021 are listed on page 7. There are a couple things on that list worth mentioning. When Bancorpsouth Bank acquired Cadence Bank on October 29th, it also took the Cadence Bank name. And, on October 1st,  Central Bancompany, Inc., Jefferson City, MO combined all of its subsidiary banks merging them all into certificate #12633 4-Star Central Trust Bank, Jefferson City, MO. This included, by asset size: 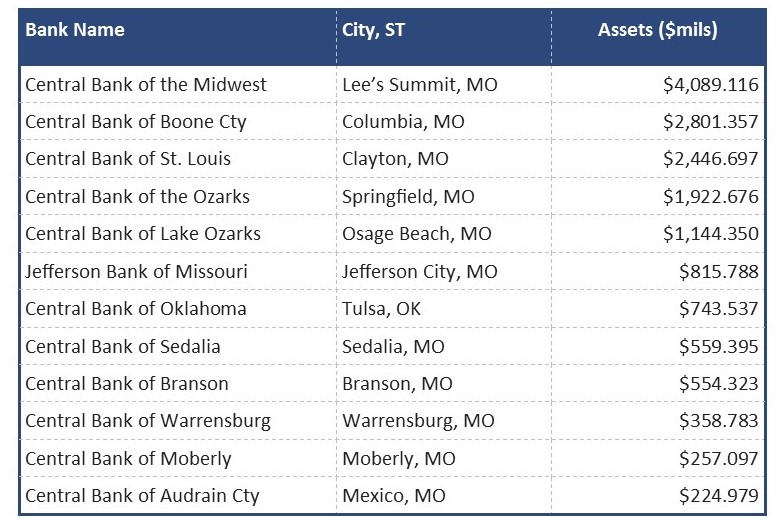