We had hoped to have credit union data and star-ratings available this week, but the NCUA made so many changes to the reporting this quarter, the data didn’t come out until Tuesday (June 7th). So while our analysts comb over the new data, we will take a look at how consumer loans are holding up at the nation’s banks.

The short answer is, “quite well”. But   there are caveats and exceptions.

Caveat #1:  While still much lower than at their latest peak, 30-89 day past due consumer loans, which are a precursor to more serious delinquencies, have begun to rise. Past due consumer loans reached 0.99% at March 31st. The credit card portion was just slightly lower at 0.91%. This is not an alarm, but is something to watch. These numbers are still much lower than pre-pandemic levels (1.34% and 1.31%). 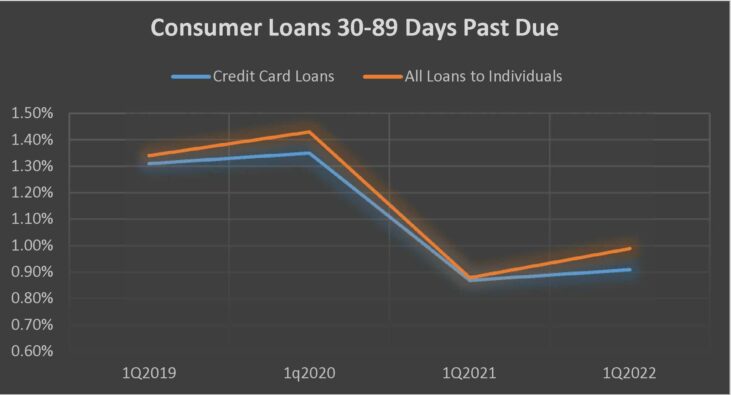 Consumer loans that are 90 days or more delinquent (or in nonaccrual status) and those that have been charged-off have not increased, yet.

Caveat #2: Americans are no longer paying down their debt. Credit card usage has not returned to its pre-pandemic level but all loans to individuals have surpassed it. 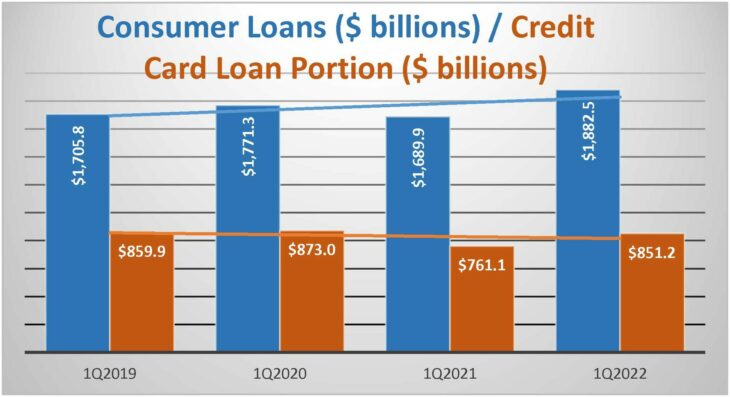 As rates rise, we can only hope that most of those consumer loans  have locked in rates, unlike credit card rates that are subject to change, and are apt to begin doing so soon.

Over half of the banks listed on page 7 met these same criteria a year ago, 3½-Star Comenity Capital Bank, Draper, UT, for example.  Also known as Bread Savings, Comenity Capital is a credit card bank that caters to consumers and issues many store credit cards (i.e. Victoria Secret, Kay Jewelers).

It’s not just Big Banks, though. Community banks that met this criteria a year ago include 5-Star Citizens Bank of Cumberland County, Burkesville, KY, a true Hometown Bank. Loans to individuals constitute 17.3% of total loans (down slightly from 17.6% a year ago). Of those, 1.7% are 90 days or more delinquent, down from 2.3% last year.

Another thing Citizens Bank has in its favor is a diversified loan portfolio. As you can see from its Bauer’s Adjusted capital ratio (CR), which is just 60 basis points lower than its leverage CR and its 5.6% Texas Ratio, its overall loan portfolio is in very good shape.

Twenty-one banks did not meet these criteria a year ago. In some cases, it was because their consumer loans were less than 15% of total loans last year. There are six of those. The most glaring of which is 2-Star GN Bank, Chicago, IL. A year ago, GN Bank reported that less than 1% of its total loans were to consumers. Today, that’s up to almost 19%.

Again, you can see from their Bauer’s Adjusted and Texas Ratios that they all have  extremely good overall loan portfolios.

Then there is one bank that met neither criteria a year ago, but met both this time. It is another 5-Star community Bank: First NB of Brownstown, IL. First NB of Brownstown grew its consumer loans just enough at 15.1% of total loans (up from 14% last year). Of those, 1.56% are delinquent or nonaccruing. And, once again, its Bauer’s Adjusted and Texas ratios are extremely good. So, while these are exceptions, Bauer has no immediate concern.