50% of Branches Closed by these 9 Banks

The United States lost more than 3,000 bank branches in the 12 month period ending March 31, 2022. But not all banks are shedding branches. In fact, nine (Big) banks were responsible for more than half of the closures. The biggest branch shedder, by far, was 4-Star Truist Bank, Charlotte, NC.

That’s not a total surprise. We knew once the dust settled from the merger between BB&T & SunTrust (December 2019) some overlapping branches would be closed. We didn’t know there would be almost 600 of them. It’s not all bad news though, Truist also opened seven new branch locations in the first half of 2022.
The other eight banks that join Truist as the top branch shedders can be found in the chart below. Seven of them have also opened new branches this year.

In fact, during the first half of 2022, nearly 350 U.S. banks opened a total of more than 500 new branch offices. After eliminating the biggest banks (those with assets totaling more than $400 billion, many of which can be found below) we were left with 52 banks that opened at least two new locations in the first half of 2022. All of them are recommended by BauerFinancial (rated 5-Stars or 4-Stars) and can all be found on page 7.

It’s no secret that banks have been consolidating. That trend has been with us for years and was exacerbated further by COVID as many of our banking activities moved online. But the branch is not dead ..or dying. As so much has been redefined due to the pandemic, so too, has banking.

What’s really different is the number of employees that each bank now employs, presumably to handle the burgeoning online business of banking. Whereas the average number of employees per branch at March 31, 2018 was 22.7. Today, that number has grown by 11.5% to 25.3. Remaining fairly stagnant during the roughest months of COVID, once the country reopened, bankers began hiring. The number of people employed at U.S. banks increased by over 21,000 in the 12 months ending March 31, 2022. The number of bank employees now far surpasses that of both one year ago and five years ago. 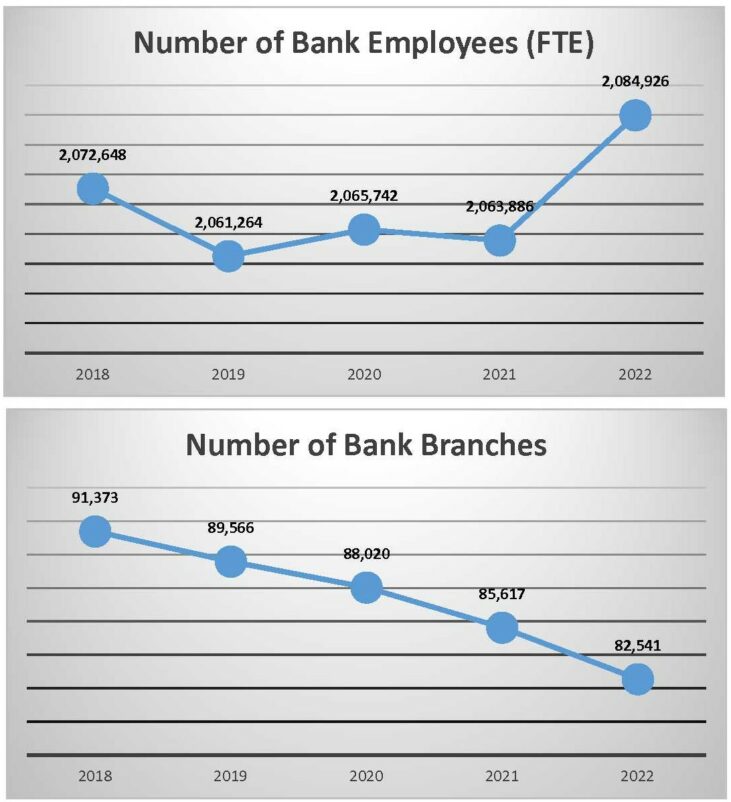