Rough Road for Farmers & Their Banks

Covid notwithstanding, the last 18 months seem to have been particularly challenging for our nation’s farmers and ranchers. In that year and a half, the Office of the Comptroller of the Currency (OCC) has issued six different proclamations allowing banks in areas hit by natural disasters to shut their doors (temporarily). That’s an average of one every three months.

February 16, 2021: Winter Storm Uri hit parts of Mississippi, Oklahoma and Texas. Six months later, (8/27/21) Mississippi was hit again. This time it was a tropical storm—Hurricane Ida—that had parts of the Magnolia State shut down as well as parts of neighboring Louisiana.

Just days after that (8/31/21) wildfires were raging across California. Drought, strong winds, high heat combined with low humidity, lightning and humans, all contributed to one of the worst fire seasons on record in California.

On the East Coast, we closed out ’21 with tornadoes (12/15/2021) tearing up swaths of land in Kentucky and Tennessee. This year, so far, flooding has been the big culprit—from Wyoming to Kentucky.

Bear in mind, these are only the disasters located where there are also bank branches that the OCC felt the need to allow the banks to close. In many rural/farming communities, there are no bank branches in the immediate area.

There were many more natural (and unnatural) disasters, to be sure.  And, with very rare exception, these disasters wreak havoc on those whose business it is to feed the rest of us. By extension, those same calamities can impact the banks that cater to those farms and ranches.

While the majority of U.S. banks hold some amount of farm/ag loans on their books, less than 1/4th are designated as having an “Agricultural Specialty”. At  the end of March 2022, these agricultural specialist banks reported nearly $74 billion in outstanding farm and ag loans, roughly 43% of the total.

The top three Farm lenders (by dollar volume) are not designated as Ag banks at all. They are:

4-Star Wells Fargo, SD and 5-Star Bank of the West, San Francisco also each reported more Farm loans than any designated Ag bank with $4.4 billion and $2.8 billion, respectively. The Ag bank reporting  the most outstanding in Farm loans is 5-Star John Deere Financial, FSB, WI with $2.4 billion outstanding as of March 31, 2022.

By state, Iowa has the highest percent of Ag designated banks with over 16%; it is also one of the top agriculture-producing states (usually ranking at either #2 or #3 depending on the metrics used). California, conversely, tops most charts in agriculture production (and receipts) but is only home to one specialized Ag bank: 5-Star Farmers & Merchants Bank Central California, Lodi, CA.

That’s concerning as ag banks need bankers that understand their unique needs, especially in times of turmoil or natural disaster. What is even more concerning though, is the alarming rate at which we are losing these specialty banks.

During 2019, the percent of Ag banks lost was just shy of those lost for the entire industry. During 2020, in the throws of COVID, we lost almost 10% of our nation’s Ag banks compared to 3.4% of the industry. The following year was better but in just one quarter of 2022, the United States lost almost as many Ag banks as it did in all of 2021.

Perhaps the loss of those Ag banks is the reason that others were able to grow their Farm and Ag loan portfolios. Those banks that specialize in agricultural lending and had the most year-over-year loan growth in farmland and/or other agricultural loans, can be found on page 7. 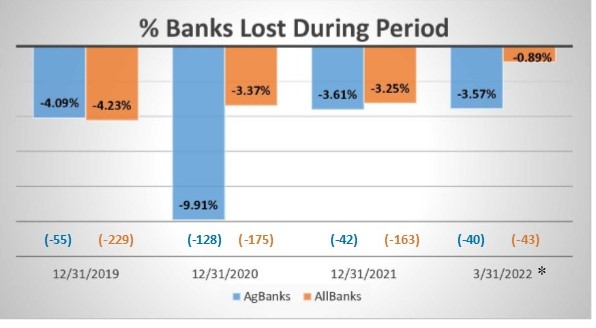