As our analysts scour newly released second quarter bank data, they will have a keen eye out for signs of stress (as always). One thing in particular that Bauer is carefully watching right now is Commercial Real Estate (CRE). Shopping malls, movie theaters and hotels may be busier today than they have been in two and a half years, but danger could still be lurking in the rafters.

During the 12 month period ending March 31, 2022, bank CRE lending increased by $98.7 billion (6.2%). At the same time, consumers were paying down debt. As a result, many banks now have a higher percentage of CRE loans in their portfolios. In fact, at March 31st, nearly 900 banks reported that CRE comprised at least 40% of their total loan portfolios. That’s a 35% increase over the 667 that reported the same a year earlier.

How will these CRE loans perform with inflation and interest rate increases? Were these loans properly underwritten? Do the banks have enough reserves to cover any losses that could arise in these loans? These are just some of the  questions Bauer asks each quarter.

Each of the 51 community banks listed on page 7 had this high CRE loan concentration (40% or more of total loans) based on March 31, 2022 financial data. In addition, total delinquent loans at the 51 page 7 banks are greater than 1.5% of the entire loan portfolio, delinquent CRE loans, slightly higher, are greater than 2% of the total CRE portfolio.

In roughly half of them, the loan loss reserves are not enough to cover even CRE delinquent loans, let alone all other delinquent loans. Although, in six of the banks listed, the only delinquencies are from CRE.

Put another way, over half of these banks could be in trouble if all their “iffy” loans went unpaid.

Spectra Bank is making strides, though, shedding over 6% of its CRE loans in the past year. However, its leverage capital ratio was just 3.08% at March 31st; its Bauer’s Adjusted and Texas ratios were 0.48% and 48.5%, respectively.

At the other end of the spectrum from Spectra is 5-Star Poppy Bank, Santa Rosa, CA. A $4.3 billion bank, Poppy Bank reported total loans of $2.6 billion at March 31st. Almost 72% of those loans ($1.9 billion) were CRE. While its CRE delinquencies are on the high side at 3.08%, Poppy Bank has more than sufficient reserves to cover all of its delinquent loans and more.

3½-Star Peoples B&TC, Ryan, OK reported a 17% reduction in its CRE and yet, CRE still represents over half of its total loan portfolio. That’s because total loans decreased by 51%. The CRE portion decreased from 58.0% to 50.4% during the 12 month period. At 8.33% of total loans, its delinquent loan ratio  compares (unfavorably) to less than 1% for its peers. With a reserve ratio of less than 10%, Peoples B&TC is also one of the banks that does not have enough reserves to cover even its delinquent CRE loans let alone all delinquent loans.

Of course CRE is real estate, so these loans have collateral. It is highly unlikely that the entire outstanding loan amount would be lost. And, as you can see in the chart, CRE delinquencies are still quite a bit lower than they were a year ago. But we are ever vigilant. 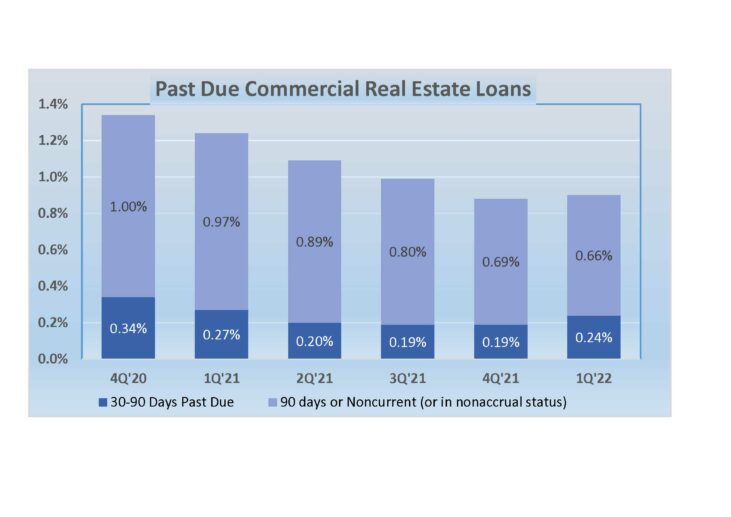