More than a Slap on the Wrist for 2-Time Offender

The average amount that U.S. banks charge annually in fees on personal deposit accounts is about 0.19% of the total balances on transaction and savings accounts (T&SA). These fees include overdraft-related charges, periodic maintenance fees, ATM charges and “other” service charges on deposit accounts. (Keep that number (less than 0.2%) in mind as we continue.)

The Consumer Financial Protection Bureau (CFPB) has ordered 4-Star Regions Bank, Birmingham, AL to refund at least $141 million back to customers that were charged “illegal surprise overdraft fees” during the 36 month period covering August 2018 through July 2021. In addition to the refunds, Regions was also ordered to pay a $50 million penalty.

This is not the first time Regions Bank has been called out for its fee practices. In 2015, the CFPB issued an order against the bank for charging overdraft fees on consumer accounts without them ever opting-in for the overdraft protection. That order resulted in customer refunds of approximately $49 million and a $7.5 million penalty. Clearly, that was not sufficient to deter the behavior. Perhaps this one will be.

That may be a little excessive, but there are 199 banks that charge more. (The 50 that charge the most can be found on page 7.) More important than the amount, however, Regions Bank has been singled out because of its “alleged” deceptive practices.

According to the consent order, Regions Bank “committed unfair and abusive acts and practices when it charged overdraft fees on transactions that had a sufficient balance at the time the Bank authorized the transaction but then later settled with an insufficient balance (i.e. “Authorized-Positive Overdraft Fees”). 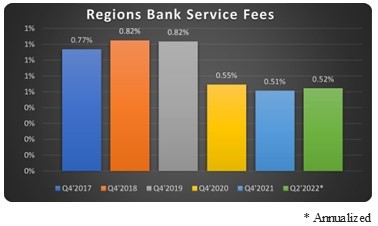 The order goes on to state that, “consumers did not understand, nor could they reasonably avoid, these fees because they resulted from counter-intuitive, complex processes that are outside the control of the consumer.”

That’s what got Regions Bank into trouble. The fact is, a bank can charge ridiculous fees as long as the customer is aware of the fees and has a “reasonable” ability to avoid them.

The 50 banks listed on page 7 of this week’s JRN charge the most in service fees (as a percent of T&SD) - much more than Regions Bank ever did. Because not all banks itemize their fee categories, we have the total amount included on page 7.

5-Star FSNB, N.A., Lawton, OK, the first bank listed on page 7, is one that does not itemize. It provides just one lump sum, and it is a doozey—10.94% of T&SD. No other bank comes close. Look at the numbers and you will see that without that fee income, FSNB’s first half profit of $6.5 million would have instead been a loss of $14.6 million.

We have reported on FSNB and its high fess practices before. As a bank that caters to our military personnel, we would hope they would answer to a higher calling.

Of the banks that do itemize, 4-Star Woodforest National Bank, The Woodlands, TX charges, by far, the most in all three  major categories. It is #13 on page 7. As a percent of T&SD, Woodforest NB charges:

For comparison purposes, towards the bottom of page 7 (#42) you’ll find 5-Star Gate City Bank, Fargo, ND which comes in at a distant second for overdraft fees at 0.89%, almost half of what Woodforest NB brings in. But again, that’s only of those that itemize.

Similarly, the bank that itemizes and charges the second highest amount in maintenance fees is 5-Star Sunflower Bank, N.A., Denver, CO. It charges 0.20% compared to Woodforest NB’s 0.45%. Most banks charge less than .1%.