Community Bank Branches are NOT Going Away

That may seem contradictory to the chart below, but notice we said “community bank branches”. According to the FDIC, in the past 12 months, the industry has closed 3,617 branch offices and opened just 1,148 for a net loss of 2,469. The previous 12 months, due to the pandemic, we lost even more.

SunTrust Bank closed 182 branches in the lead up to its merger with BB&T. That pales in comparison to what BB&T and the combined 4-Star Truist Bank, Charlotte, NC closed—1,242. That’s a total of 1,424 branches lost during the five year period, mostly in the SE.

Rounding out the top seven were:

Several other Big Banks closed 100 or more branches as well, but these were the top 7. If we were to remove Big Banks from the chart below, it would look quite different.

Community banks, on the other hand, are contracting. But their focus is to stay community-oriented and maintain the ability to compete. They are merging with like-minded community banks, and maintaining (at least for the most part) the branches that they have. 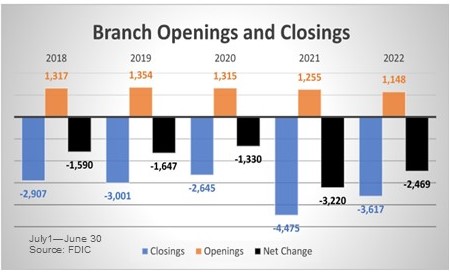 5-Star Encore Bank, Little Rock, AR leads the list with six new full-service branch openings in the 12 months noted. It has also opened two more in the months since. The Tampa location, which fortunately did not get damaged from Hurricane Ian, opened on August 1st and the Charleston, SC branch opened later that month on the 22nd. Encore is not stopping there. It has no fewer than seven new full-service offices in the works in Colorado, North Carolina, South Carolina, Tennessee and Texas. Most of these states already have a loan production office.

Although it is not a community bank, and therefore not listed on page 7, Rockland Trust Company also opened a new branch in Westborough, MA giving it eight offices in Worcester County. Established in 1907, Rockland Trust now has $20 billion in total assets and operates through 125 branch offices, all in Massachusetts.

As for Oakstar Bank, only one of its four new offices is a full-service branch: Ottawa, KS. The other three are loan production offices in  Arkansas, Colorado and Missouri. This is a continuation of Oaskstar’s modus operandi for the past several years, although it seems to be straying farther from its home base.

Today, Oakstar Bank is approaching $2.0 billion in assets and operates through 23 branch offices, four of which are specifically designed for loan production. But, as you can see, the community bank branch is far from dead (or dying).