BauerFinancial is the source for unbiased, independent bank and credit union star-ratings. No institution pays for its rating, nor can they avoid a rating.

BauerFinancial, Inc. has been analyzing and reporting on the financial condition of the nation’s banking industry since 1983. With our help, countless depositors successfully navigated their way through the savings and loan crisis of the ’80s when others lost much of their savings in uninsured deposits. Bauer was there for them again during the Great Recession circa 2008.

Through the years BauerFinancial earned the reputation of “the nation’s bank rating service”. Now, after more than three decades, hundreds of newspapers depend on our ratings for their readers. Over the years, federal and state regulators have referred thousands of inquirers to Bauer as well.

Ratings and reports are compiled from financial data for the period noted as reported to federal regulators. The financial data obtained from these sources is consistently reliable, although; the accuracy and completeness of the data cannot be guaranteed by BauerFinancial, Inc. BauerFinancial relies upon this data in its judgment and in rendering its opinion (e.g. determination of star ratings) as well as supplying the data fields incorporated herein. BauerFinancial, Inc. is not a financial advisor; it is an independent bank research firm.

How do we do it? Each bank and credit union is required to file a detailed financial report with federal regulators four times a year. BauerFinancial obtains this data in its raw form directly from regulators. The quarterly data is subjected to a thorough analysis and is compared with historical data for consistency. Upon completion of the analysis, a star-rating is assigned based on a scale of zero to five stars with five stars being the strongest.

BauerFinancial is a registered trademark. Any unauthorized use of its content, logos, name, and/or Star-ratings is forbidden. Although the financial data obtained from these sources is consistently reliable, the accuracy and completeness of the data cannot be guaranteed by BauerFinancial Inc. 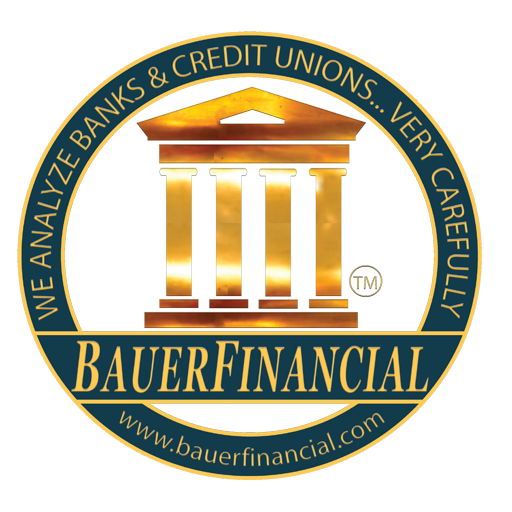